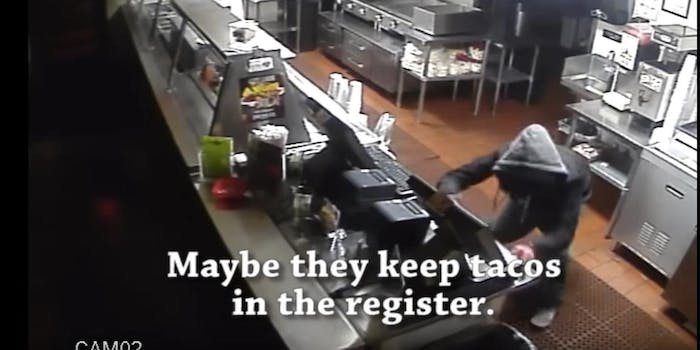 Looking to take a bite out of crime.

Apparently the fare at Frijoles and Frescas Grilled Tacos is so tempting that it compels people to break into the establishment after closing in search of a tasty tortilla-shelled treat. And while the restaurant can’t take responsibility for what their tacos cause people to do, they’re at least taking it in good humor and using the incident for a bit of hilarious publicity.

Two burglars broke into the Las Vegas-based joint at around 3:30am on December 16, with the entire heist caught on security cameras. Frijoles and Frescas Grilled Tacos has since turned the footage into a commercial, announcing that these locos must have been totally crazy for their tacos to shatter some glass to get inside. And they were so tunnel-visioned by their munchies that they took the cash register instead of some tacos.

Police are looking for the perpetrators, and the restaurant has asked that anyone with information contact the Las Vegas Metro Police Department. It’s also unknown if they have any connection to the Hamburglar.