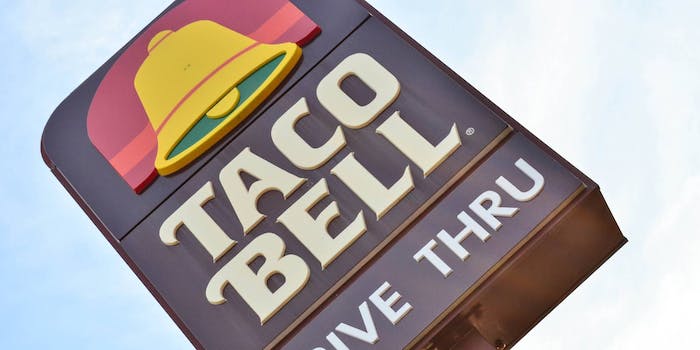 Taco Bell might have a sports betting addiction, is a fair weather fan

Outside the bun betting.

The last game of the NBA semifinals takes place on Memorial Day. The game seven match-up between the Golden State Warriors and the Oklahoma City Thunder may very well be more entertaining than the finals themselves.

To distract from a potential snoozer of a series between the Monday night winner and the Cleveland Cavaliers, Taco Bell is back to placing money tacos on a major sporting event. It’s launched a “steal a game, steal a taco” gimmick in which any away team win during the NBA finals nets citizens around the country a free Doritos Locos taco.

We’ve seen this behavior before from the fast food chain. The fair weather fan comes riding out like some type of knight in shining crunchwrap to garner favor from the American public and distract from the fact that Taco Bell might have a sports betting addiction.

A base has been stolen in the World Series! Grab your free A.M. Crunchwrap on November 5th between 7-11 a.m. Rules: https://t.co/yyutdNEGEA

Taco Bell’s initial “steal a taco” bet started back in 2007 with its “steal a base, steal a taco” campaign during the World Series. The Yum brand probably made a covertly awful gamble and had to go public with the gimmick in order to appease bookies.

Dropping a major hint that the faux Mexican fast food titan has no concept of sabermetrics or statistics that factor into odds, Taco Bell bet the country that no one could steal a base during the Red Sox-Rockies series. Spoiler alert: the Sox did.

It happened again in 2008, then in 2012, and in 2015 as Taco Bell continued to pull back the double-decker taco mask revealing a soft shell of a gambling addiction for all of America to see. Seeing that the baseball season could only last so long and that there are only so many important games in the year, it set their sights on basketball instead.

Thus began “steal a game, steal a taco.” This precedes Taco Bell’s lone successful gamble in 2001, when the Mir space station failed to hit a Taco Bell target in the South Pacific upon re-entering Earth’s orbit and preparing for a crash landing.

I set out to ask Taco Bell about its costly problems, then got caught up in their emoji Twitter campaign.

You may have won this round Taco Bell but rest assured, the country is going to be eating Doritos Locos while you eat crow come the NBA Finals.