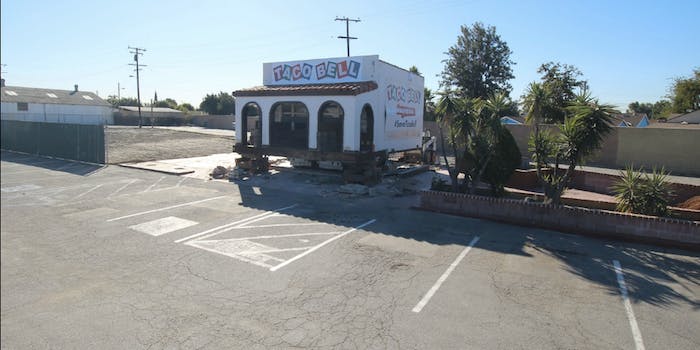 Taco Bell is always on the lookout for its next menu item—like the Doritos Locos Taco—or pondering how to be connect with millennials (by starting a petition for new emojis). But the corporation isn’t forgetting its roots.

In 1962, the fast food chain’s first restaurant opened in Downey, California. On Thursday evening, this original location is being saved from demolition, lifted off its foundation, and driven down to company headquarters in Irvine. The 400-square-foot building will be loaded onto the bed of a truck for its 45-mile journey into Orange County.

And you can watch it all happen via webcam.

A work of art.

According to Quartz, this restaurant, also referred to as “Numero Uno,” closed in 1986 and has since had a number of independent fast food joints cycle through the real estate. Property owners were planning to redevelop the site after the building’s last renters left, and that’s when Taco Bell swooped in to save its ancestral franchise from bulldozers and jackhammers.

On the livestream, you can check out what’s been done to the building in preparation for the move. Nov. 12 is when it looks to have been actually lifted from the ground and propped up, ready for relocation. And on Nov. 16, some vintage Taco Bell signs were put on the tiny white shack.

This move is one for the history books.