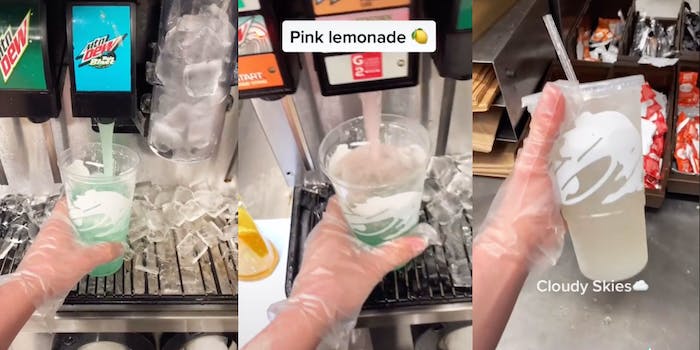 Whatever you call it, this classic recipe is a secret menu standby.

User @ceotacobellhacks, who simply goes by Wubzee on the platform, divides his page between Taco Bell secrets and hacks, gaming videos, and typical teenage TikTok fare. His Taco Bell videos are by far the most popular on his page, and his “cloudy skies” video soars above any other with a whopping 2.3 million views.

The recipe for Wubzee’s most popular Taco Bell creation is uncomplicated. Simply combine ice, half a cup of Mountain Dew Baja Blast, and half a cup of pink lemonade. The combination will come out as a lovely layered pink and greenish-blue drink before being stirred. After using a straw to combine the two halves, however, the mixture will transform into a “dirty dishwater” grey, matching its name quite well.

Users in the comments were split between those who’d tried the combo drink before, those who were eagerly planning their next Taco Bell trip to give it a try, and those who thought the drink looked entirely unappetizing.

Many users noted that they’ve “been doing this for years,” but many don’t refer to the Baja/lemonade combo as “cloudy skies.” A number of other names for the drink were tossed around, including “grey,” the “silver bullet,” the “invisible man,” and my personal favorite, “bong water.”

Other users recommended a few additions to the drink—including Malibu rum and vodka—and tossed out some of their favorite Taco Bell drink combos. Next time you “live mas,” try mixing half a cup of Baja Blast with half a cup of regular Mountain Dew for a “ninja turtle,” or, if Mountain Dew isn’t your thing, consider a “thunderstorm”: pink lemonade mixed with blue Power Aid.

While the majority of commenters were discussing names and exchanging drink recipes, some viewers were balking at the idea of a “cloudy skies.”

Users are informing Wubzee that he need not “fix what isn’t broken,” and calling him out for his excessive use of ice. “You want some drink with that ice,” one viewer teased.

Another commenter noted that the drink combo “sounds like heartburn to me.”

According to Wubzee, you can actually order a “cloudy skies” the next time you stop by a Taco Bell. (But maybe consider the workers instead.)

The name does appear to change based on location, however, so if they don’t recognize your first attempt give some of the other recommendations a try. Based on responses from other Taco Bell employees, you should be safe ordering a tall glass of “the grey.”