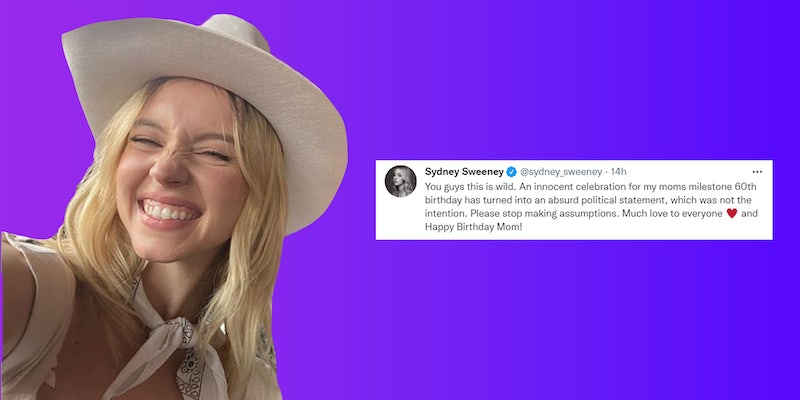 ‘You may want to look into getting a goddamned life’: Sydney Sweeney fans decry star’s cancelation for family party photos

Sydney Sweeney, star of Euphoria and The White Lotus, has responded to outrage from folks on the internet after she threw her mother, Lisa, a “surprise hoedown” 60th birthday party in Idaho, Sweeney’s home state.

Sweeney’s post included the caption, “No better way to celebrate my momma than a surprise hoedown,” and featured photos of her along with family and friends wearing cowboy hats and boots as they rode mechanical bulls and performed line dances to a live band.

In another post, she delineated how she was able to keep the ruse going, which involved a bit of careful planning that involved her mom’s friends who were in on the plan. “#1 Create a theme she’d enjoy. #2 Have her besties tell her they’re taking her line dancing at the bar in town. #3 Have sign out front continuing the [ruse],” Sweeney commented.

However, there were some folks online who took issue with clothing items various attendees at the party wore that could’ve been interpreted as them possessing conservative beliefs.

There was also mention of a guest wearing a “Blue Lives Matter” T-shirt, which is a controversial statement in the greater social discussion of the role racial profiling plays in police brutality.

“You guys this is wild,” she wrote. “An innocent celebration for my moms milestone 60th birthday has turned into an absurd political statement, which was not the intention. Please stop making assumptions. Much love to everyone and Happy Birthday Mom!”

Her posts inspired a litany of different responses, and the conversation shifted from the attire that some guests were wearing to an online political debate.

There are a number of folks online who have claimed that Sweeney comes from a “family” of “trump supporters” and others who weren’t buying the idea that the hats were indeed just a joke.

“Why would they copy that design if they didn’t support it though?? i wouldn’t be caught d*ad in anything that even slightly resembled trump merch,” another shared.

Someone else posted a photo that appears to have come from Sweeney’s brother’s Instagram account that shows a baby wearing a “Make American Great Again” hat while standing outside of the White House.

Some tweeted screengrabs of Sweeney’s brother, Trent, that show him following Donald Trump’s Instagram account, while others accused Sweeney of “sugar coating” her own social media posts to avoid including any Pro-Trump imagery.

“Kinda funny how Sydney Sweeney carefully curated her IG post so that none of the MAGA-inspired hats were seen and then her dimwitted brother’s post blew it all up,” one user wrote.

A few even demanded that Sydney “explain [the] decision” of a guest who decided to wear a “Blue Lives Matter” shirt, conflating that with the hoedown attire of the themed birthday party.

“And the fact that everyone was evidently encouraged to wear western style clothing but dude was somehow allowed to wear a shirt with a notoriously heinous message!???? Sydney needs to explain that decision,” one Twitter user wrote.

Sweeney has said in July of 2022 that she pays for more her publicist every single month than she does her own mortgage.