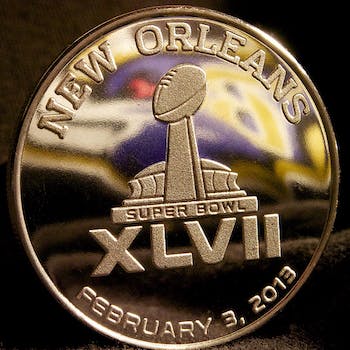 It took until only the start of the second half of the Super Bowl for the number of game-related tweets to surpass last year's total.

It took until only the start of the second half of the Super Bowl for the number of game-related tweets to surpass last year’s total.

During the National Football League championship game between the Baltimore Ravens and the San Francisco 49ers, sports fans sent more than 24.1 million tweets about the clash and the halftime show. By way of comparison, the 2012 game saw 13.7 million tweets.

The largest spike in activity occurred when the lights went out during a partial power outage at the New Orleans Superdome. Twitter peaked at 231,500 tweets per minute (TPM). Jokers came out in force, with The Dark Knight Rises gags aplenty:

Inevitably, parodies such as @SuperBowlLights and @TheSBLights cropped up, with the latter snagging more than 15,000 followers.

The longest kickoff return in NFL history at the start of the second half brought 185,000 TPM, just a shade more than at the end of the game, which had a peak of 183,000 TPM.

The end of her set was the big talking point for many fans, as the tweet volume hit 268,000 TPM.

Twitter also noted that around half of the ads that aired during the game included hashtags, up from about a fifth last year. Lastly, and perhaps most importantly, Twitter noted that the Puppy Bowl saw around 500,000 tweets, because everyone turned to the puppies during the blackout.

The Puppy Bowl scooped just under half as many tweets as President Barack Obama did for his second inauguration two weeks ago (1.1 million tweets).

Meanwhile, the Super Bowl wasn’t quite as popular on Twitter as the presidential election, which saw more than 31 million tweets.