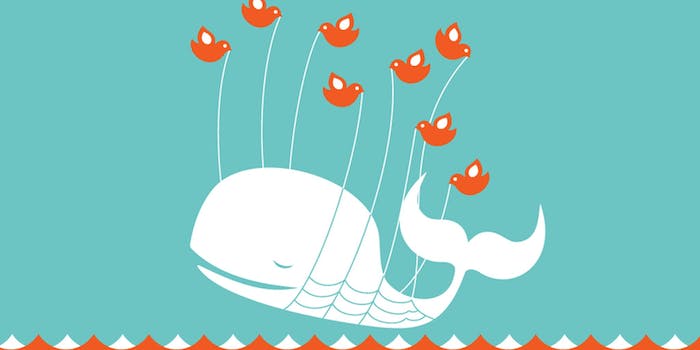 So long Fail Whale, and thanks for all the fish

Have we seen the last of Twitter's Fail Whale?

On a big night for Twitter, there was nary a Fail Whale to be seen.

The cute illustration by Yiying Lu was a common sight on Twitter’s website for years as the service buckled under a high volume of tweets. It cropped up a few times this year as Twitter struggled to cope.

There was no cry of “whale ahoy!” Tuesday evening, however, as Twitter’s systems handled more than 31 million tweets related to the election over the night.

The presidential race had been widely touted as the Twitter election—not least by Twitter employees, including CEO Dick Costolo. It would have been a tough pill to swallow had the company’s servers collapsed. They didn’t, despite an influx of tweets at key moments, which could have overloaded Twitter’s infrastructure.

The biggest spike occurred at 11:19pm ET, as news networks called the election for President Barack Obama. More than 327,452 tweets flooded the community in the space of a minute. The next biggest peak actually occurred seven minutes earlier, with 85,273 tweets per minute as the Iowa result was called and all but wrapped up Obama’s win. If anything had broken Twitter, it would have been a sudden jump in the volume of tweets, unable to fit into Twitter’s pipes at the same time.

There’s no denying Twitter had a successful night, as it also saw the most retweeted tweet of all time—a post by Obama’s campaign. Some perspective is important, however.

Those 31 million election-related tweets account for just over six percent of the 500 million Twitter sees on a daily basis. The first presidential debate saw 10.3 million tweets, but that was condensed to a 90-minute stretch, whereas the election talk was spread over several hours.

It could very well be the case that many more people were reacting to the election, with one-word tweets like “awesome” or “damn,” for instance. It’s not easy for Twitter to pick up on those contextless tweets in its analysis, and as such, there were probably more than 31 million election tweets.

It wasn’t all smooth sailing, though. The person running the @CAPcongress Twitter account misread results on NBC’s website, setting off a chain that led to some news organizations reporting that Elizabeth Warren won the Massachusetts Senate seat before NBC actually called it.

Credit must be given to Twitter’s engineering team for avoiding the overload problems that plagued the service for years. Such was creative lead Doug Bowman’s happiness at Twitter’s ability to cope with the high volume, that he tweeted a simple message: “RIP Fail Whale.”