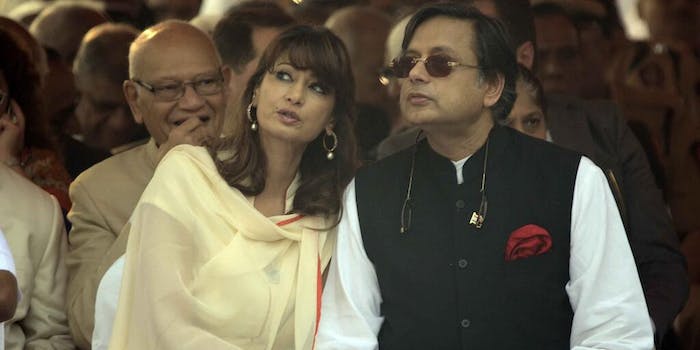 What began as an entertaining little political scandal has taken a deadly turn.

Early last week, the wife of an influential politician launched a series of heated tweets against a Pakistani journalist, whom she accused of being a spy—and of having an affair with her husband.

On Saturday, the wife was found dead in the five-star New Delhi hotel room she was sharing with her husband.

They changed their tune after a post-mortem conducted later on Saturday, however. Tharoor’s had died a “sudden unnatural death” and that there “certain injuries on the body,” Dr. Sudhir Gupta, head of the autopsy board at New Delhi’s All India Institute of Medical Sciences, told CNN. He did not elaborate on the nature of the injuries.

The spat began on Thursday when Sunanda Tharoor suddenly leveled a series of accusations against Mehr Tarar, a journalist based out of Lahore, Pakistan. Sunanda claimed that Tarar had “stalked” her husband and tried to “break” the couple’s marriage—allegations which Tarar vehemently denied, both on Twitter and in interviews with Indian press.

“In her tweets, she has accused me both of stalking him and of having an affair with him,” she said to New Delhi Television.

“How can it be both? It just shows there are wild allegations. Her tweets to me are so crazy that all I can do is laugh.”

Shashi Tharoor, who himself has more than 2 million followers on Twitter, stayed out of the exchanges. But the couple later released a joint statement on Facebook, testifying to the strength of their marriage and seemingly blaming Sunanda’s tweets on a hacker, or at the very least an “unauthorized” user of their accounts.

“Various distorted accounts of comments allegedly made by Sunanda have appeared in the press,” the statement read. “It appears that some personal and private comments responding to these unauthorised tweets—comments that were not intended for publication—have been misrepresented and led to some erroneous conclusions.”

“We wish to stress that we are happily married and intend to remain that way. Sunanda has been ill and hospitalised this week and is seeking to rest. We would be grateful if the media respects our privacy.”

On Sunday, Shashi Tharoor gave a deposition on his wife’s death to the New Delhi authorities. Earlier, in a letter to India’s Home Minister, he promised to cooperate fully with the investigation, declaring that he was “horrified to read the reckless speculation rampant” in the media.

For her part, Tarar reacted with shock to the news of Sunanda’s death.

What the hell. Sunanda. Oh my God.

I just woke up and read this. I’m absolutely shocked. This is too awful for words. So tragic I don’t know what to say. Rest in peace,Sunanda