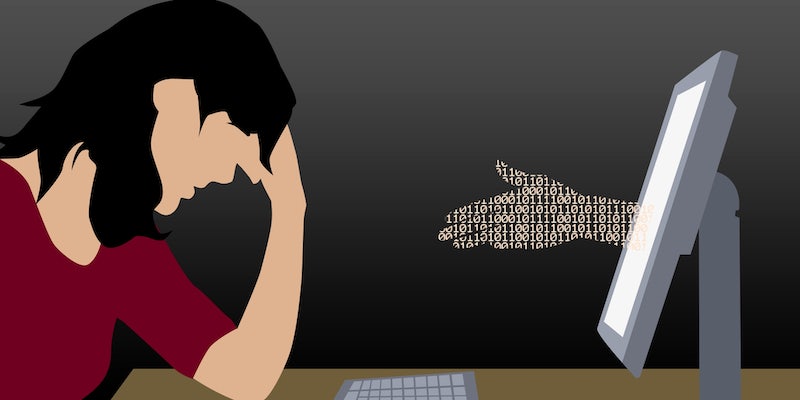 A cry for help in the digital night

How do you deal with a suicde threat made in an anonymous forum?

The note came on a Saturday evening. I was just glancing through the email on my phone when one subject line jumped out at me.

It contained the words “kill myself.”

It wasn’t from anyone I know. It was in fact an anonymous email from an anonymous person sent to a listserv that usually contains announcements.

I’ve written enough stories on suicides (I used to cover suicides off the Golden Gate Bridge) that I know there is one rule in particular that you can’t ignore: When someone mentions suicide—even in jest (maybe especially in jest)—you have to pay attention.

So I opened it.

The first line took my breath away: “I call the suicide hotline.” The rest was equally chilling. Here was a person reaching out to a group, most of whom were likely strangers, asking for help.

I immediately turned to my friend, who happened to be physically in the same room, and read her the note.

“Should I call the suicide hotline?” I asked. It was a stupid question. I didn’t have her identity. And like I said, this was an anonymous note on a semi-anonymous email list.

She didn’t know what to do either. And she’s one of the smartest people I know.

Maybe the writer was really some troll. Maybe this person didn’t actually exist.

That is the thing about the Internet that will probably always confound me. It’s real and it’s not real at the same time. People will say things online when they are alone, facing the screen, that they might not feel safe saying in person. At the same time, it can allow people to pretend and to fake conversations.

It can bring out the best in people: They can write beautiful posts about life that they never would speak in person. But it also can  bring out the worst. Some nice guy who might open the door for you when you walk into the local bank might also be the same guy hiding behind the anonymity of his computer who suggests you kill yourself when he doesn’t like your story.

But this one felt real. It seemed like there was a real person there who was experiencing real pain. It was like getting a call from a friend in the middle of the night saying she just couldn’t handle life anymore. I would jump up and do whatever I could for her. Except this came from someone I don’t know at all.

Did I have a responsibility to help? Would someone else do it?

I kept thinking of that Edmund Burke quote: “The only thing necessary for the triumph of evil is for good men to do nothing.”

I’m well aware of the fact that most people do nothing when they see an accident. It’s not that they are uncaring. They just assume someone else has called 911.

So whenever I see someone broken down at the side of the road, or I witness an accident, I always call. Often, the operator tells me that someone else already called it in. But nearly just as often, my call is the first.

Maybe I should have gotten on the phone and made a call. But I sat there, paralyzed. Calling the cops or a hotline not only felt useless. It also felt a bit like a betrayal. Was it any of my business to sic the authorities on her? And how would I find out who she was? If I called the police, they would have to trace the IP address and track her down. That felt way too invasive, especially for someone who was having trouble dealing with “the system,” as she wrote.

I thought of writing her directly. But what could I say? I knew nothing of her personal plight and the note was rather vague. I would quote the whole thing but that also felt like too much like an invasion of her privacy.

Or had it? Could I have done something more?

Janet Kornblum is a media trainer and writer based in San Francisco. If you use voice recognition, she’ll understand your voice-os.