In shutting off its entire national Internet connection, Sudan joined Egypt, Libya, Burma, and Syria in an attempt to quell unrest by effectively muting the voices of its citizens

Internet connectivity returned to Sudan early this morning after being shut down for an entire day in the wake of riots, according to the global connectivity consultancy Rensys. In shutting off its entire national Internet connection, Sudan joined Egypt, Libya, Burma, and Syria in an attempt to quell unrest by effectively muting the voices of its citizens.

But by maintaining that shut off for only one day, it also harmonized with the experiences of those countries, which discovered that the Internet cannot be easily compartmentalized, even if its physical connection to the global Internet can be. In the end, everything from a country’s economy to its military communications are compromised by such a move.

For four days, protests and riots have raged in the African country of Sudan, costing two dozen lives so far. A gas price hike threatened the prices of more basic elements of Sudanese life, food above all.

Yesterday, on the third day of the riots, the Sudanese government shut off the Internet completely, Rensys’ Doug Madory reported 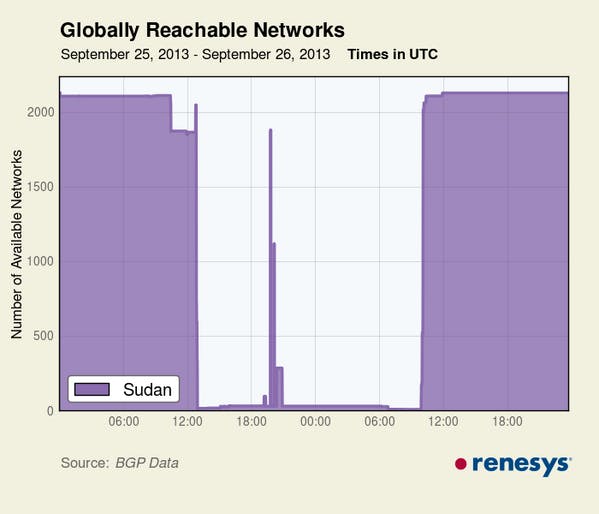 “Our plots of connectivity clearly show that Sudatel and Zain experienced identical outage timelines,” Madory wrote, referring to two of the country’s three IPs, “while Canar’s total blackout followed a somewhat different schedule. This difference in timing implies that this event was not caused by a single catastrophic technical failure, but strongly suggests a coordinated action to remove Sudan from the Internet.”

The only party in Sudan with the power to shut down its three Internet providers is the government.

In addition to an attempt to interrupt Sudanese citizens’ ability to organize, it’s possible the government wants to avoid conducting its violent crackdown in the light of global attention.

As the Associated Press noted: “The riots… have turned into a call for the ouster of President Omar al-Bashir, who has ruled the country for more than two decades. “

International online activists have, in the past, ginned up workarounds, providing, for instance, dial up connections for Egyptians and Libyans to use. Other groups, have worked on translating and posting phoned in tweets when the Internet goes down. Both those methods were used when Syria’s Internet went down.