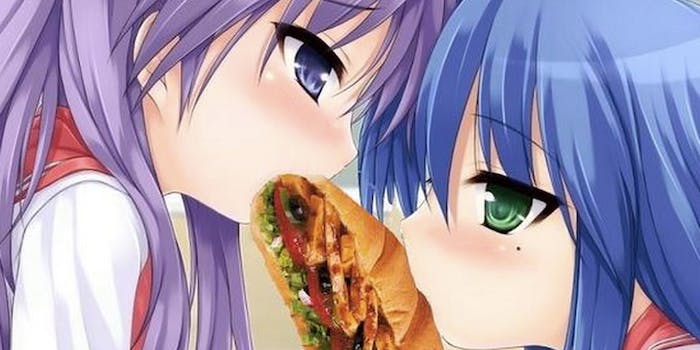 Subway may want to clean up its Facebook page, because fans of animated pornography have given the “Five Dollar Footlong” a whole new meaning.

According to one of the submitters who spoke to the Daily Dot, identifying herself only as Ember, the majority of the photos originated on Hatsune Miku Troll, a Facebook fan page dedicated to Miku Hatsune, an animated pop star in Japan.

“Hatsuke Miku Troll started making daily sandwich pics censoring with a subway sandwich and their logo,” Ember told the Daily Dot. “So, the admin of that page asked if they should post the pictures to subway’s page. Of course, a bunch of people agreed and joined in. We all went to websites for original pictures, saved them, opened them up in Photoshop or whatever other editing program we had, and placed the sandwich pic and or logo in there. Subway also banned us from the page afterwards, which isn’t surprising at all.”

When a screenshot of Subway’s Facebook predicament made it to Reddit’s r/funny, redditors blamed Subway for the mess.

“This is what happens when a large public entity lets everyone tag them in photos,” emarkd wrote. “They should know better.”

Subway apparently became aware of the incident Wednesday afternoon, and a moderator began removing the images. However, that has only encouraged submitters.

Subway has yet to respond to the Daily Dot’s requests for comment.

UPDATE: The Daily Dot has received the following statement via email from a social media marketing agency representing Subway:

We are aware of the excessive spam on our Facebook wall and have removed all content that is in direct violation of our House Rules. We are in contact with Facebook to investigate the matter further and enact a swift resolution.