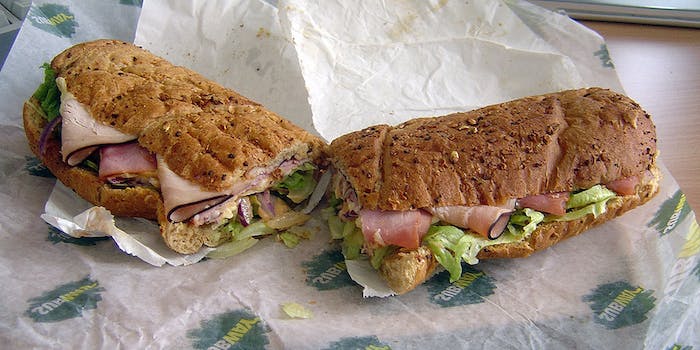 DO NOT USE, NON COMMERCIAL The Daily Dot

This guy ate a cockroach sandwich, so he’s waging Twitter war against Subway

If wilted ingredients, stale bread, and some ungodly chemical odor (seriously, what is that bread-like smell?) weren’t enough to dissuade you from eating at Subway, this’ll probably do it.

After allegedly finding a cockroach in his sandwich at a Subway franchise in Sudbury, Ontario, Patrick Balfour took to Twitter to voice his complaints against the sandwich giant. He’s sparing no expense in the process: He even bought two anti-Subway promoted tweets for $90. His story is a testament to the power of social media to affect sweeping change—or the power of a near-obsessive-compulsive desire to shame a sandwich chain, either one.

Balfour’s Subway saga began 11 months ago, when he contacted @SubwayOntario via Twitter to complain about finding the critter in his sandwich (a turkey footlong on Italian herb and cheese bread, if you’re curious).

He didn’t have a photo of the sandwich. “I was [disgusted] and got rid of the sub as soon as possible,” he said in an email. “I never thought it would drag on this long or that I’d ever need a photo of a dead cockroach.” But after sending a few tweets to @SubwayOntario, the company eventually responded, asking for Balfour’s contact info. When they failed to follow up with him after 10 days, he reached out again and they responded with the same message.

For a while, Balfour forgot about the cockroach incident, until @SubwayCanada launched a promotional initiative on Twitter. He decided to use their new advertising campaign as an opportunity to contact them again:

@SUBWAYCanada I found a cockroach in my sub. I spoke with someone from @SubwayOntario & they said someone would be in touch. Never happened

@mike_check_2012 @SUBWAYCanada I wasn’t paying attention and it was dead. I thought it was a black olive at first until I saw the legs

@SUBWAYCanada @SubwayOntario a Why are you ignoring my tweets? You’d think that if I found a cockroach in my sub you might want to reach out

“I called [the line], even though I thought that was a horrible response,” he told me. “What I got was a 24 hour voice mail. Now I was mad!”

I found a dead cockroach in my sub which I bought in Ontario. This tweet is being promoted! Do you care now @SubwayCanada? #Subway

@draxapup @SUBWAYCanada if they have twitter available to engage with their customers they should solve their problems. Not very smart!

Since Balfour promoted his tweet, it’s been retweeted dozens of times. People started sharing their own Subway horror stories with Balfour and praising him for his Twitter acumen. His travails even inspired the creation of a parody account, @SubwayCockroach:

Great work @patrickbalfour – paid #media is now also in the hands of the consumer. pic.twitter.com/IOUWcUPlaW

@patrickbalfour @SUBWAYCanada last sub I ever ate at subway, look at that disgusting mess. No refund given pic.twitter.com/9RKA5rjsgn

(Note: Unless you want to ralph all over your keyboard, do not click on that photo in the above tweet. Seriously, it’s way grosser than finding a cockroach in your sandwich).

Of course, given that the offending incident happened such a long time ago, it begs the question: What, exactly, does Balfour hope to get out of publicly shaming Subway on Twitter?

@ej_dickson @dailydot @SUBWAYCanada as the process has gone on it’s changed. The roach is gross but their lack of customer service upset me

@ej_dickson I originally just wanted to let them know the store location. I heard the place next door had a roach problem and wanted….

@ej_dickson to give them a heads up that they might have an issue. I don’t want any money!!!

Via email, Balfour elaborated on his motivations: He wants to use his moment in the social media limelight to highlight the ineffectiveness of Subway’s customer service methods. The fact that the company has a Twitter and refuses to engage with their customers via social media is “like having a phone line and when someone calls to ask a question you tell them they have to ask in person,” he wrote. “It doesn’t make sense. I shouldn’t have to jump through hoops to tell a story that they should want to hear.

“I don’t want money, I don’t want subs,” he concluded. “All I know is that the way they currently use social media is not doing them any favours.”

Whatever you might think of his persistence or unorthodox methods, Patrick Balfour is much like Thot Pocket: the fast-food folk hero Twitter both needs and deserves.