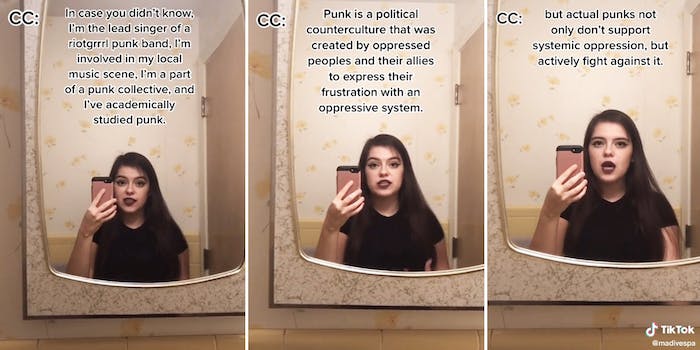 This ‘studied punk academically’ meme is not very punk rock

Joe Strummer must be spinning in his grave.

Punks have been declaring “punk is dead” for decades now, as every new generation of oldheads makes room for a pluckier, fresh-faced generation of youths to adopt the counterculture. However, this time it seems as we can unequivocally call the time of death as occurring at some point on Oct. 5; incidentally the day this “studied punk academically” meme was born.

TikTok user Madi Vespa (@madivespa), is a 21-year-old singer-songwriter based out of Boston who fronts a “riotgrrrl punk band” called Cherry Brat. Vespa, whose real name appears to be Madison Williams, had taken to the platform to deliver a lesson in punk rock ahead of the upcoming 2020 presidential election.

“There’s been a lot of discourse about people ‘gatekeeping punk’ on this app, and I’m a punk, so let’s talk about it,” Vespa says in the video, somehow with a straight face. “In case you didn’t know, I’m the singer of a riotgrrl punk band, I’m involved in my local music scene, I’m part of a punk collective, and I’ve academically studied punk.”

She goes to make some points—obvious at best, and questionable at worst—about how punk came about as an anti-establishment movement to give a voice to those oppressed, and how punk is “rooted in leftist ideology.”

“If you don’t have the political ideology to match punk, then you’re not punk, because it’s a political counterculture,” Vespa concludes the video.

Vespa’s video went viral on Twitter after being shared by user @samantha_shon (she has since locked her account) as plenty of people jumped in to roast her smug sermon with jokes and memes about how she claims to have “studied punk academically.”

“Imagine trying to tell the Ramones you’re punk bc you’ve ‘studied it academically’ and you know for that reason it’s ‘rooted in leftist ideology,'” quipped Daily Caller editor Sarah M. Albers. “Riotgrrrl? Cringe,” added another user. Others were even less kind!

In her latest video, posted just a few days ago, Vespa says that she’s taking a break from social media as it’s gotten “really overwhelming” and she needs a bit of a breather. It’s probably for the best. She may also want to brush up on her academic studies while she’s at it.