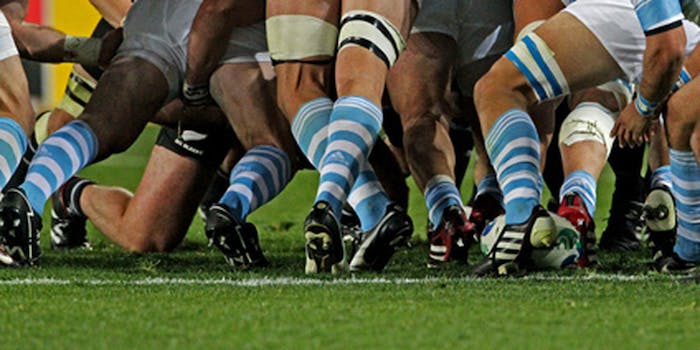 This is why you don’t streak a rugby match

The finest use of slo-mo to date.

While most of the planet remained in the sweaty grip of soccer madness as the first 2014 World Cup matches played out, spectators at a rugby game in New Zealand were treated to the sight of a bone-crushing, once-in-a-lifetime tackle—and neither team was involved.

Seeking to partake in a custom that lacks any credible explanation, a man attending an International Test Match between the New Zealand All Blacks and England at Forsyth Barr Stadium decided to run onto the pitch without any clothes on. Having evaded security personnel to make it into the open, he was casually strutting along when a guard took a flying lunge at his backside.

YouTube commenters were evenly divided as to whether the streaker got “exactly what he deserved” or was justified in pressing charges over, um, unnecessary roughness. At least one observer went so far as to offer a racist gloss, blaming the culture of New Zealand’s indigenous peoples: “Typical sneaky ass Maori move to blind side somebody,” they wrote.

In a perfect world, however, that tackler just earned himself a spot on the team.