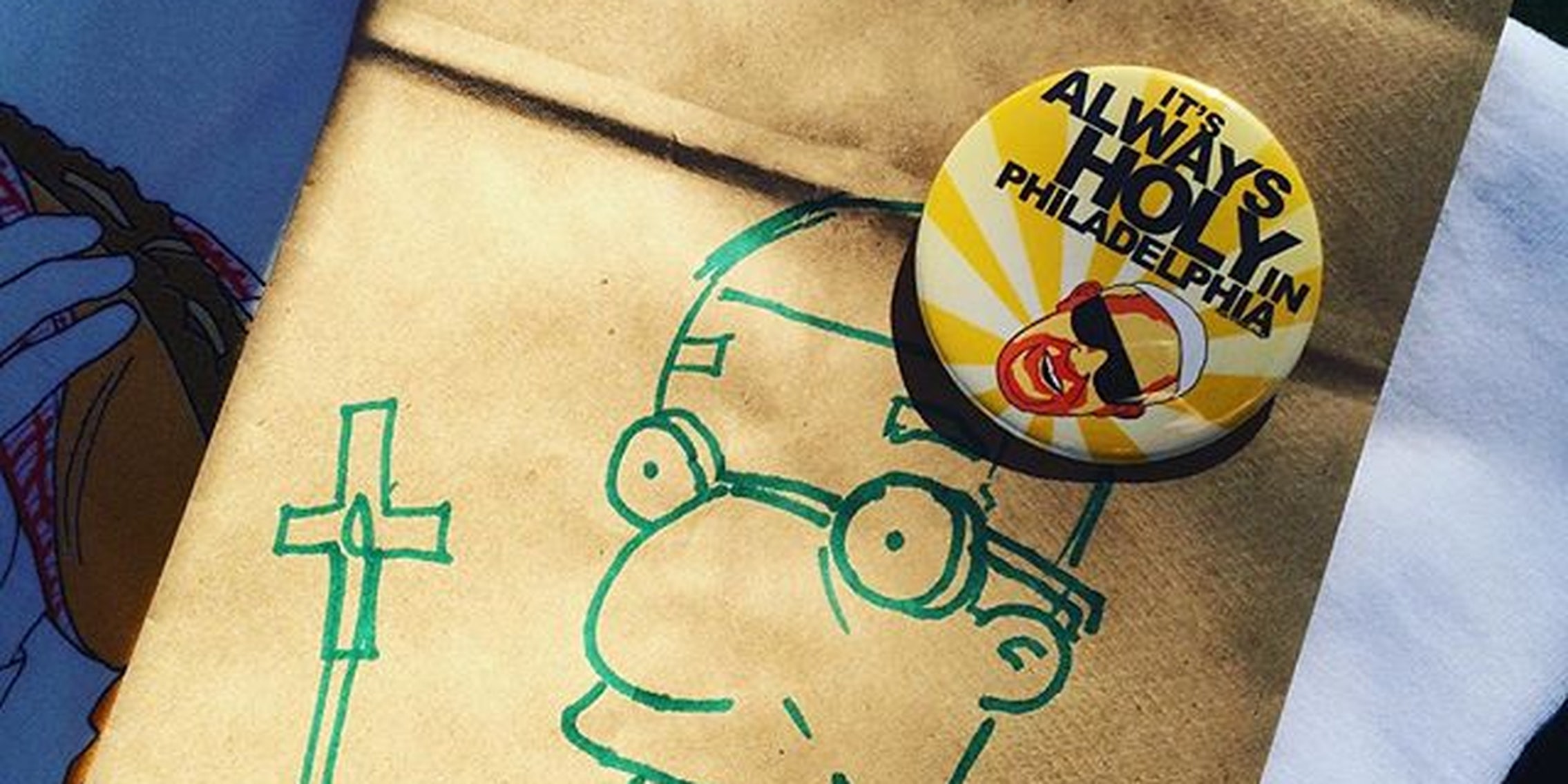 The 14 weirdest pieces of Pope Francis merch on Etsy

The pope is dope.

Pope Francis merch has gotten out of control.

The pontiff’s six-day tour of the United States has inspired a flood of papal souvenirs, knick-knacks and tchotchkes in the Holy Father’s likeness. Pope Francis-inspired fragrances are flying off the shelves. The demand for Pope Francis bobbleheads has outpaced that of the Barack Obama bobblehead, resulting in stores all over the nation selling out of the miniaturize pontiffs.

New York City, Philadelphia, and Washington, D.C., are flooded with images iconizing the pope’s mythical visit to each particular city. Shirts depicting Pope Francis eating a Philly Cheese Steak. Emoticons of Pope Francis taking a stroll by the Reflecting Pool, or in a New York City cab. Singing pope mobiles. Toasters that burn the pope’s image onto your bread.

What’s the reason for the pontiff obsession? Gabe Wiener, who along with a group of co-workers created the “Pope is Dope Philly” collection on Etsy, thinks the wide and esoteric range of Pope Francis merchandise reflects Pope Francis’ public reputation. “He’s a different kind of pope than they’ve had,” Wiener told the Daily Dot. “He’s definitely considered more progressive than previous popes. His willingness to reach out to a younger and wider audience has gotten people excited and encouraged people to kind of have fun with it.”

Here are 14 of the most out-there pope products we found on Etsy.

Shelling out $50 bucks may seem a bit steep for a bottle of sparkling liquid that is neither alcoholic nor holy, but it is wrapped in gold leaf. Given that you won’t be tempted to drink its contents, this commemorative “Pope Francis Rocks Philly” sparkling water can forever adorn your mantle and remind people of your expensive taste. 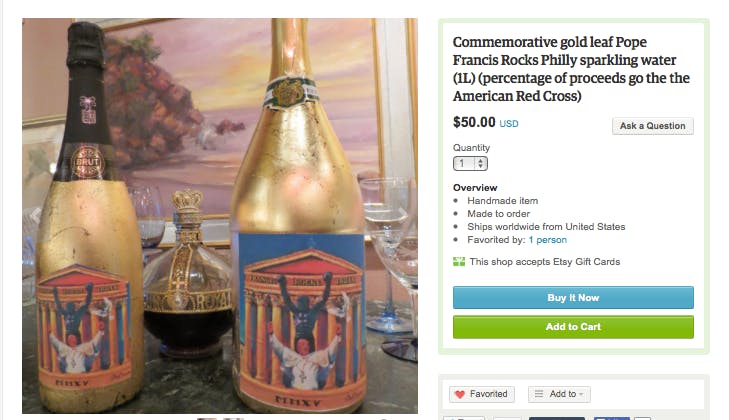 A Pope Francis amigurumi crochet doll is obviously something you could just make a DIY version of at home.

3) “Pope Francis Is My Homeboy” pin

If you secretly wish those “Jesus is My Homeboy” T-shirts from the mid-aughts were cool again, this is the perfect button for you. 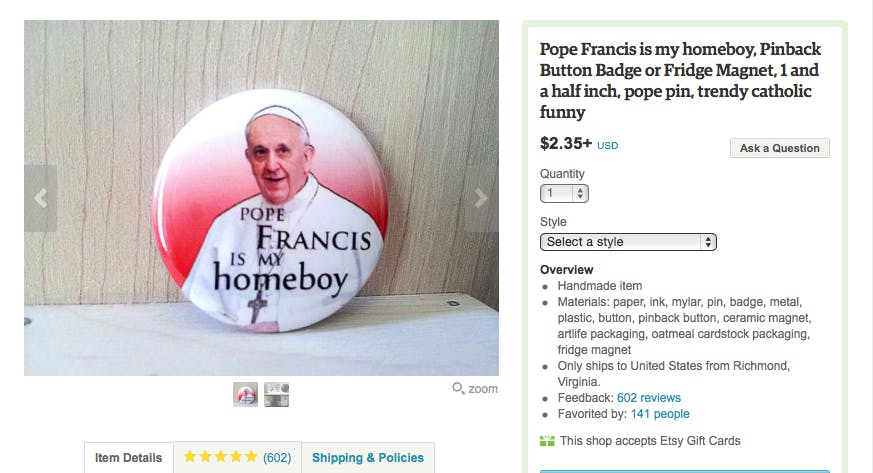 “Now, this is a story all about how my life got flipped-turned upside down. And I’d like to take a minute. Just sit right there. I’ll tell you how I became the bishop of a town called Rome…” 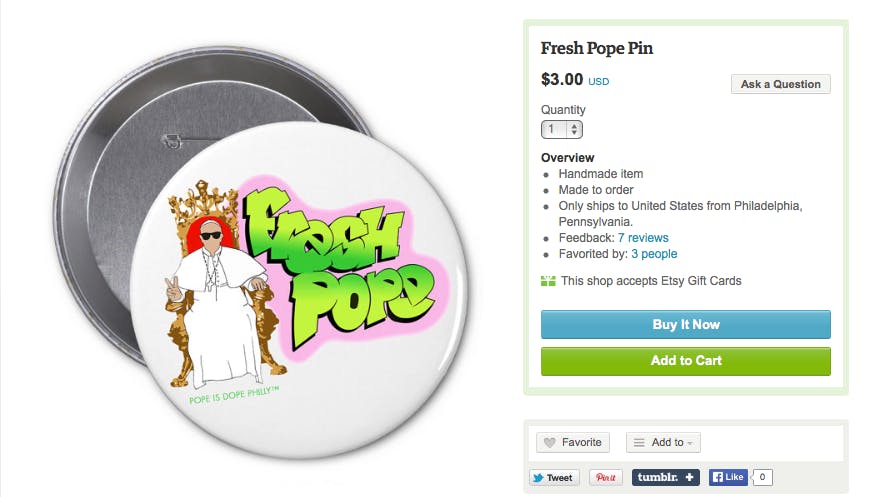 For times when the light of the Holy Father is so bright, you have to wear shades. 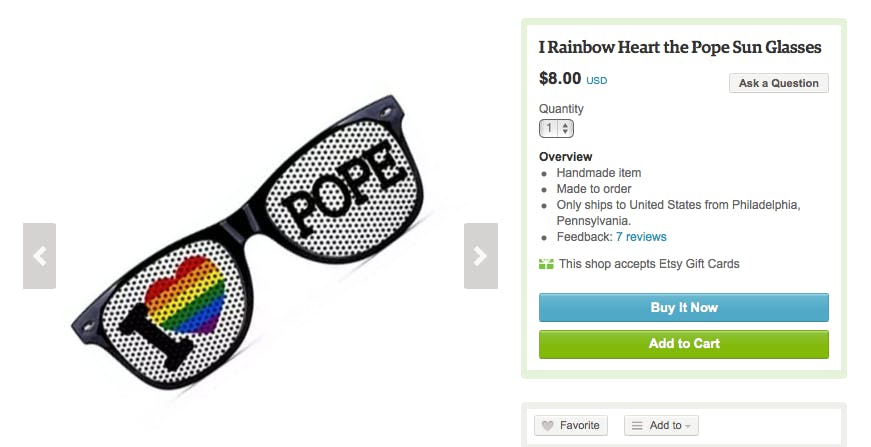 So, are you trying to make the point that Pope Francis resembles the villain of a Michael Crichton novel? 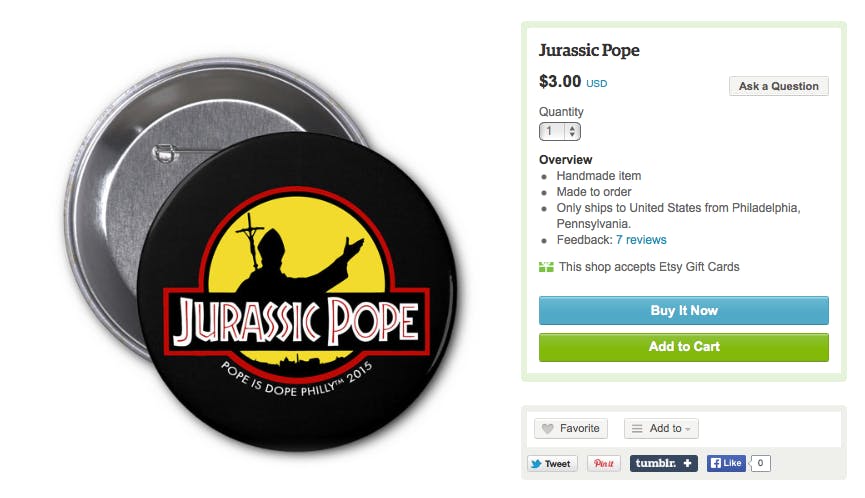 Okay, let’ s just make a list of a bunch of random things that start with the letter “P.” 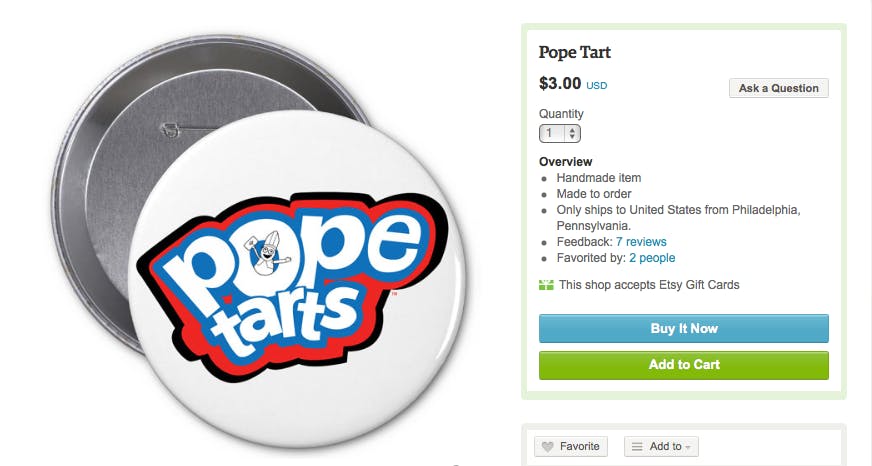 What, Pope Francis isn’t inspiring enough all by himself? You have to superimpose the Holy Father on top of the most inspiring scene in Rocky, too? 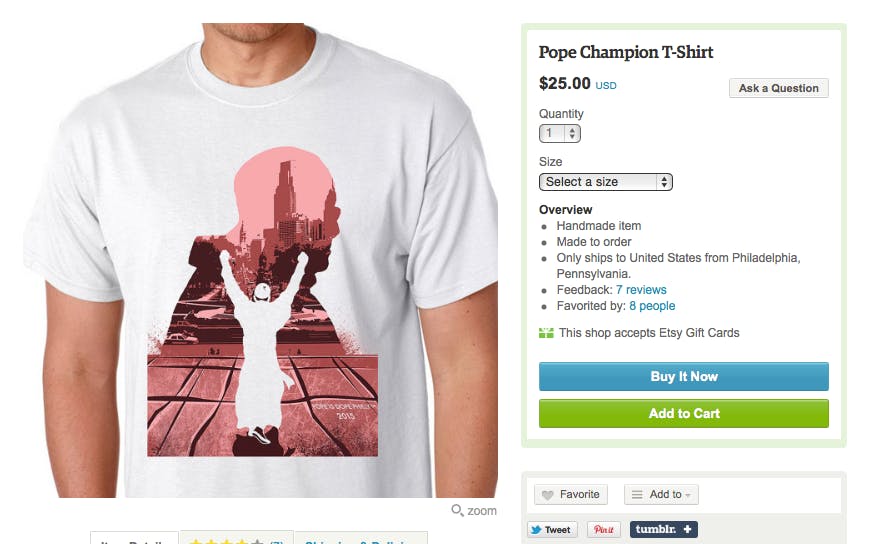 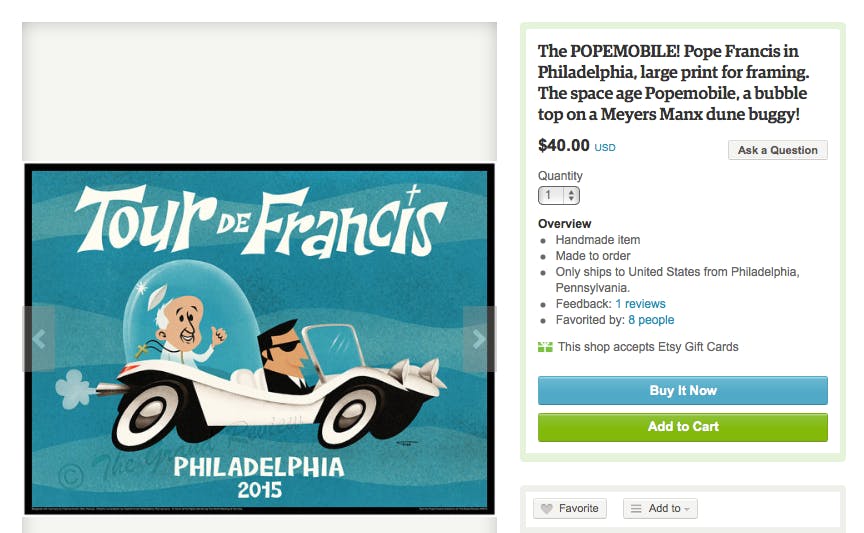 For those who need an Andy Warhol version of absolutely everything. 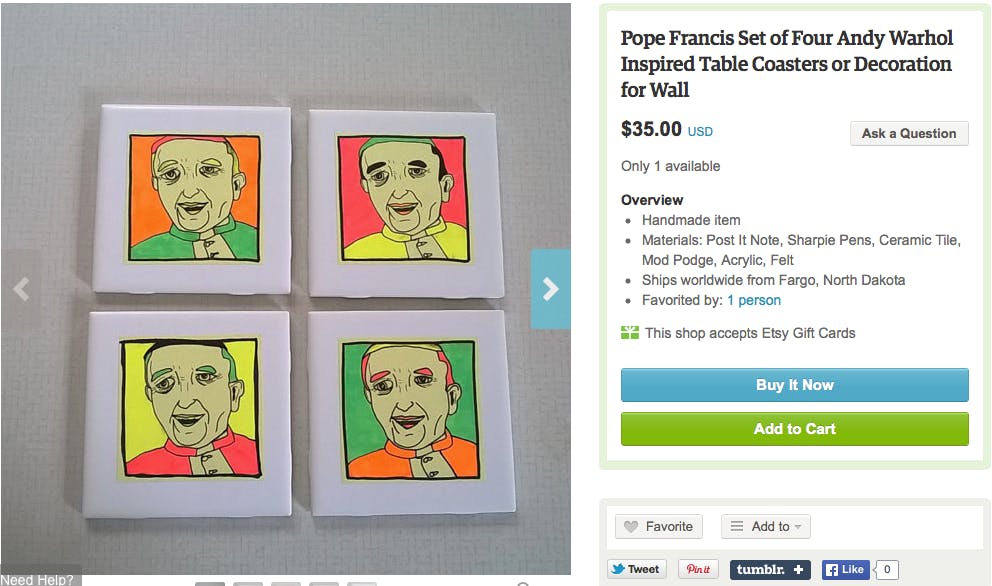 Say what you will, Mike Huckabee, but Pope Francis—or, in fact, any of these individuals—would be a better person to put on U.S. currency than your wife. 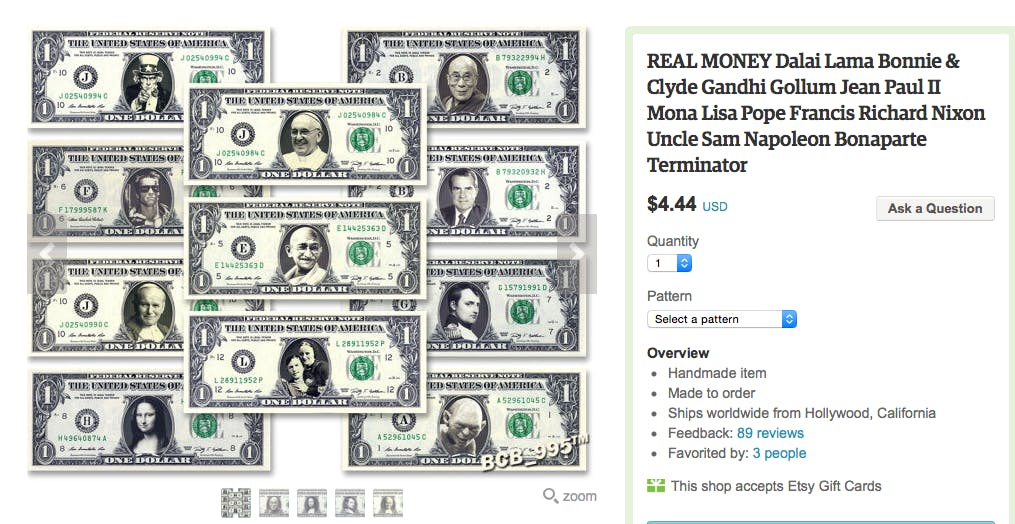 It’s OK, Pope Francis, they made a bobblehead of Barack Obama too. It’s a compliment in this country, really. 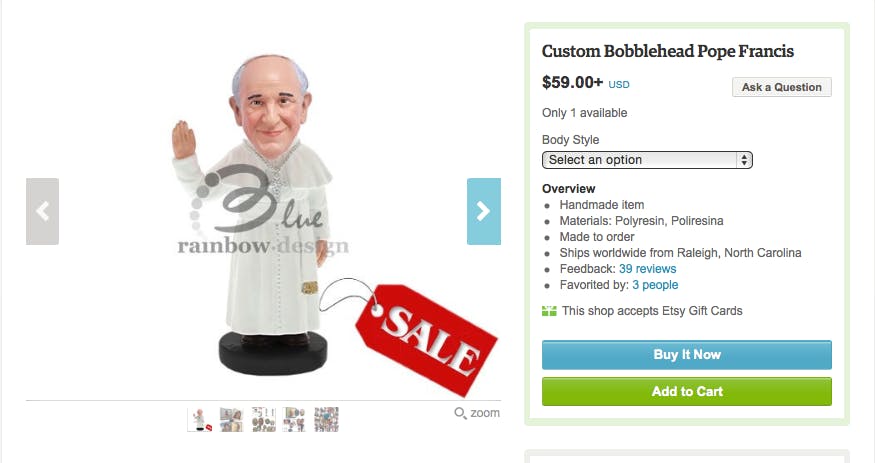 No papal merchandise collection would be complete without a wooden Pope Francis peg doll. 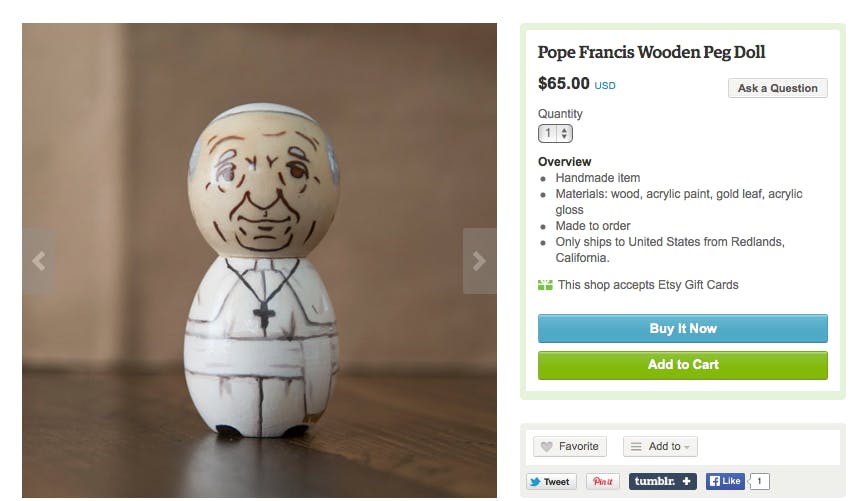 It’s Always Sunny in Philadelphia is a sitcom on FX about five of the worst people ever. Pope Francis is most definitely not one of them. 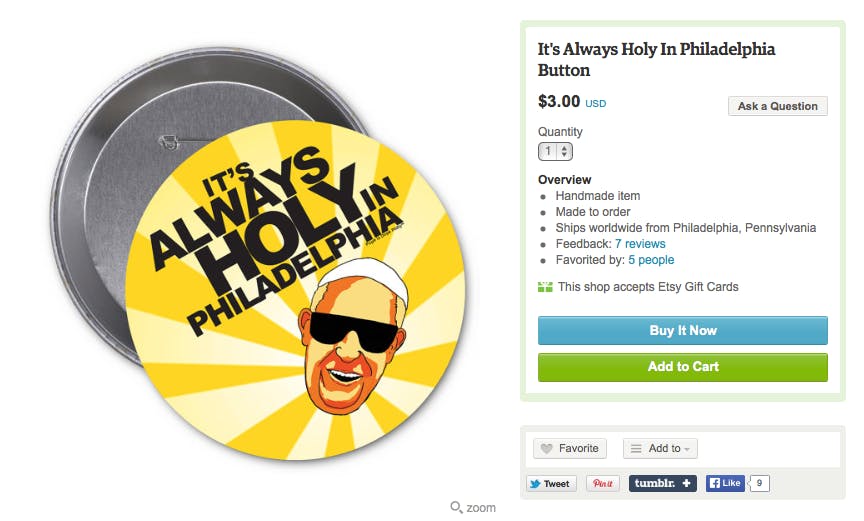