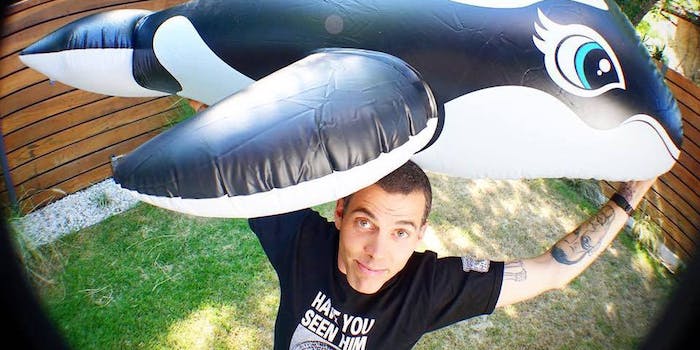 Jackass star Steve-O was arrested in Los Angeles on Sunday night and could face multiple charges after he climbed a construction crane in order to protest SeaWorld.

Steve-O (real name Stephen Glover), who was fined $239 last year after he edited a highway sign in San Diego to say “SeaWorld Sucks,” first hinted that he would be involved in yet another crazy stunt with an Instagram photo posted Saturday. It shows him holding an inflatable whale he calls “Shammy,” and the caption informed followers that his upcoming stunt would probably get him in “a lot of trouble.”

More importantly, he wanted them to tune into his livestream on Facebook’s new service.

At 7pm PT Sunday (10pm ET) on the dot, Steve-O posted his first broadcast and explained to his more than 9.1 million Facebook fans what exactly he was going to do. Knowing the authorities probably wouldn’t like what he had in mind, he was being extra cautious about giving away his location.

Although he would be out of touch for several hours, he had plenty of equipment with him so that he would be able to broadcast from his final destination: the top of a construction crane, at least 100 feet in the air.

Steve-O planned to protest SeaWorld over the controversial revelations from the 2013 documentary Blackfish. He occasionally posted photo updates showing his progress, calling what he planned to do “really fuckin crazy.”

Dozens of first responders arrived at the scene about an hour after Steve-O started his protest, unaware of whether he needed to be rescued; a crew even prepared a cushion on the ground in case Steve-O fell. But once Steve-O arrived at the top of crane, he inflated Shammy (which now had “SeaWorld Sucks” on it) and set off fireworks.

He described it all as “pretty exciting.”

Steve-O eventually climbed down from the crane himself at approximately 9pm PT. Police were waiting for him at the bottom and promptly arrested him. Later on, he asked his fans if anyone would bail him from jail.

Steve-O has yet to be formally charged, but he could potentially face several charges, including conspiracy to commit a crime, trespassing, setting off explosives without a permit, and filming without a permit.

Update 7:42am CT, Aug. 25: Criminal charges have officially been filed in this case. According to the San Diego ABC affiliate, “Stephen Gilchrist Glover, 41, was charged with one count each of creating a false emergency, use of unregistered fireworks, storing fireworks without a permit, possession of fireworks without a permit and trespassing.” The charges carry a maximum penalty of $4,500 in fines and four and a half years in jail.