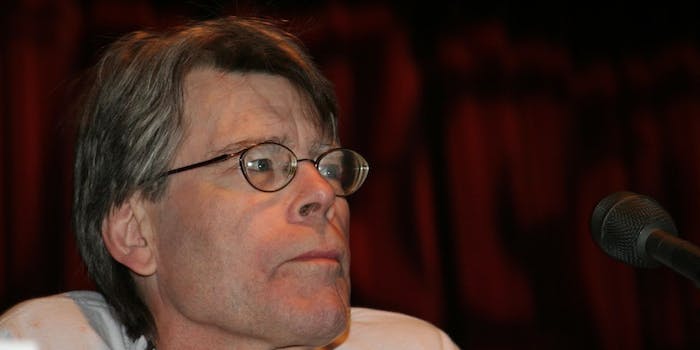 Horror fans, get ready for The Vining and The Vining 2: Doctor Tweet.

Horror fans, get ready for The Vining and The Vining 2: Doctor Tweet.

In the shocking twist you never saw coming, Stephen King, who loves kicking it old-school so much that he famously wrote his novel Dreamcatcher entirely in fountain pen, has finally joined Twitter.

My first tweet. No longer a virgin. Be gentle!

Among the 70,000 people who promptly rushed to follow him as word spread throughout Twitter were director Edgar Wright; screenwriter Frank Darabont, who’s been responsible for most of King’s successful screen adaptations including Shawshank Redemption and The Mist; and of course Gaiman and Atwood, who promptly followed back.

King’s social media track record is shaky: though he was famed for writing on a typewriter through much of his early career, he was an early e-book adopter, launching one of the first online subscription models for a novel in-progress. The effort failed, but King’s works have always had a viral quality, most notably evident in the successful social media buildup to the unfortunately lackluster 2011 miniseries Bag of Bones. With the success of Doctor Sleep, a critically acclaimed follow-up to The Shining, it looks like King has decided to gift fans with shorter snippets of wisdom. Hopefully we’ll even get writing advice like the incredibly astute, easy-bake instructions he gives in his memoir Of Writing.

On Twitter at last, and can’t think of a thing to say. Some writer I turned out to be.

Don’t bet on it. We’re pretty sure that King, a master of just about every genre in existence, will take to Twitter like a Langolier takes to your nightmares—with terrifying relish.