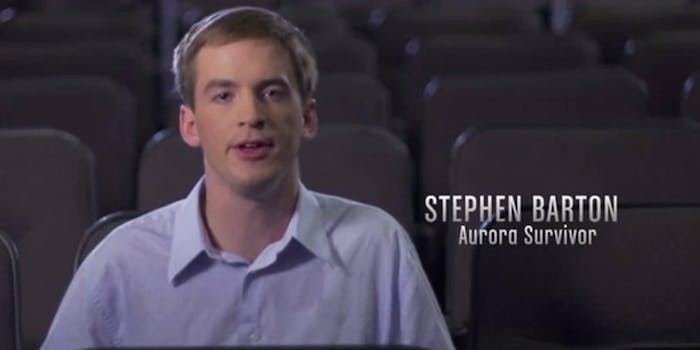 Stephen Barton, who was shot in the face and neck in July, is asking both presidential candidates to lay out clear plans for gun control.

A survivor of the mass shooting in Aurora, Colo. is speaking out for gun control on YouTube.

In the thirty-second public service announcement, Stephen Barton described how lucky he was to survive the July shooting, which killed 12 people and injured 57. He asked viewers to watch the upcoming presidential debates with the issue of gun control in mind.

An estimated 48,000 people will be murdered in the U.S. over the next four years, according to Demand a Plan, the organization behind the video. Barton said he decided to support Demand a Plan’s petition-driven campaign to crack down on the illegal use of firearms because the time is right to start the conversation.

“Especially now, given what’s happened in the past few months with guns and these mass shootings, I don’t think there is a better opportunity to talk about this,” said Barton in an interview with the Associated Press.

“It’s really just a very basic request that both candidates start talking about this, that they take the situation seriously.”