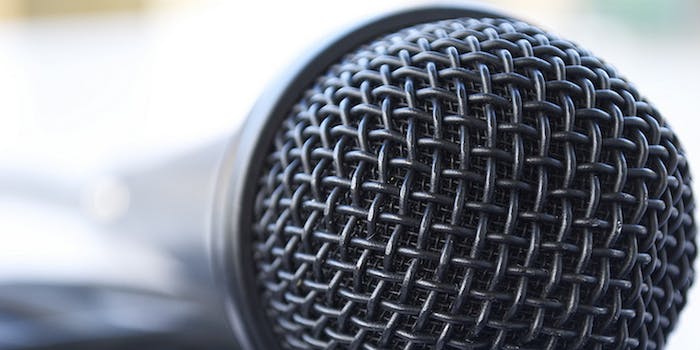 On StarMaker, users' videos are automatically uploaded to YouTube for the whole world to see.

The one thing I fear more than death is someone sneaking into my bedroom to covertly record me belting out a Katy Perry anthem. Luckily, it’s a horror most of us needn’t worry about—so long as we don’t use the free, five-year-old karaoke app StarMaker.

You probably haven’t heard of StarMaker. Though free, a few years old, and billed as the “#1 Music Video and Singing App,” it’s not terribly popular, as it serves the fairly niche audience of people who want to sing karaoke in relative solitude. Last summer, it debuted a “music video selfies” feature, seemingly in hopes of enhanced social reach.

But if you read the fine print in the app’s Terms of Service, you’ll learn that the ostensibly private karaoke videos saved by users are automatically uploaded to YouTube for the whole world to see.

The upshot: If you go to StarMaker’s YouTube pages, you’ll find videos of people singing their favorite tunes, evidently unaware that they’re being projected online.

While all this is technically legal, given the app’s detailed terms of service, most of the covertly posted videos depict minors, children who look as young as 8 or 9. Many clips have fewer than 100 views, so exposure is limited—for now.

Normally, I’d love to laugh at this sort of thing. People doing horrible covers on the Internet? Sign me up! But StarMaker’s practice feels exploitative. Some of these kids are surely aware that they’ll end up on YouTube, but you can’t tell me that this woman knew strangers would be able to watch her singing through the app’s tutorial whenever they wanted.

My heart goes out to anyone whose private rehearsal was turned into a public performance without their meaningful consent. Also, I’m never downloading anything to my phone again.

Update 11:10am PT, May 14: A StarMaker spokesperson clarified to the Daily Dot that a profile is required to save a video and that the sign-up process entails industry-standard age verification and the ability to make videos private. While the default is public, as outlined above, according to the spokesperson, “StarMaker require(s) that the user explicitly confirm that they understand it will be uploaded to its public YouTube channels.” This article has been updated for clarity and context.

Photo via Derek Gavey/Flickr (CC BY 2.0)