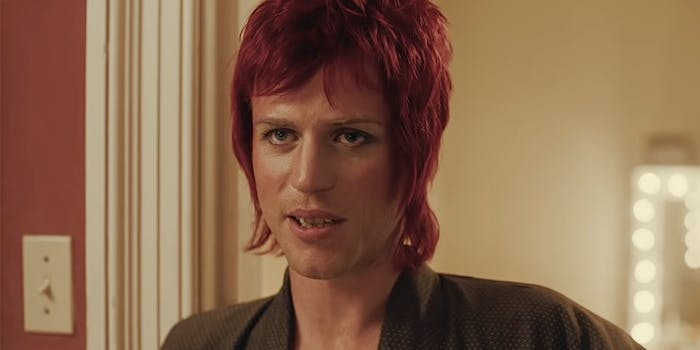 Why is Hollywood so obsessed with bad celebrity biopics?

Who decided that this unauthorized David Bowie biopic was a good idea?

Titled Stardust (yes, even the title has an air of uncertainty), this biopic wasn’t authorized by David Bowie’s estate. Not a good start for a film about a beloved and recently-deceased celebrity. This also explains why the trailer features none of Bowie’s music, setting it apart from the corny-but-entertaining Rocketman, a glitzy musical that was made with Elton John’s full support. Instead we’re left with an unrecognizably bad Bowie impression, sans music, hastily propped up by a rickety framework of biopic cliches. Actually, before we go any further, you should just watch the trailer:

Hollywood should really have rethought the biopic genre after Walk Hard: The Dewey Cox Story came out in 2007. Parodying the Johnny Cash biopic Walk the Line, Walk Hard did for biopics what This Is Spinal Tap did for documentaries. It skewered every overused cliché in the playbook, mocking Hollywood’s obsession with cringey sentimentality and attention-grabbing celebrity cameos. If you played a Walk Hard cliché drinking game with Stardust, you’d probably be unconscious by the second act.

While it’s not entirely fair to judge a film by its trailer, it’s pretty obvious that Stardust sucks. Bohemian Rhapsody was a hit because it had access to Queen’s music, distracting the audience from the bad script, hideous wigs, and infamously clunky editing. With Stardust, we’re just stuck with Johnny Flynn’s unconvincing Bowie impression. When he introduces himself as Bowie in the trailer’s first scene, it honestly feels like a punchline.

But even if director Gabriel Range had access to Bowie’s discography, Stardust faces an insurmountable obstacle: David Bowie’s life doesn’t fit into a typical biopic structure. You can’t tell a straightforward rise-and-fall story about his tragic childhood or drug problems, because his public image was all about branding. His success relied on his musical talent and his ability to create a series of public facades, rebranding himself again and again. His personal life was secondary, and by 1971 he definitely wasn’t the uncertain newcomer we see in Stardust, being guided by his American publicist (Marc Maron).

In addition to all these problems, Stardust is haunted by the specter of Velvet Goldmine. Also lacking the rights to use Bowie’s music, Velvet Goldmine director Todd Haynes reimagined Bowie as a fictional glam rock star named Brian Slade, hiring bands like Radiohead, Pulp, and Roxy Music to record new music for the soundtrack. It’s a truly brilliant film that outstrips most (if not all) conventional biopics, embracing the queerness of Bowie’s 1970s image, and telling a story that riffs off Citizen Kane. It’s hard to imagine any straightforward Bowie biopic measuring up, never mind Stardust.