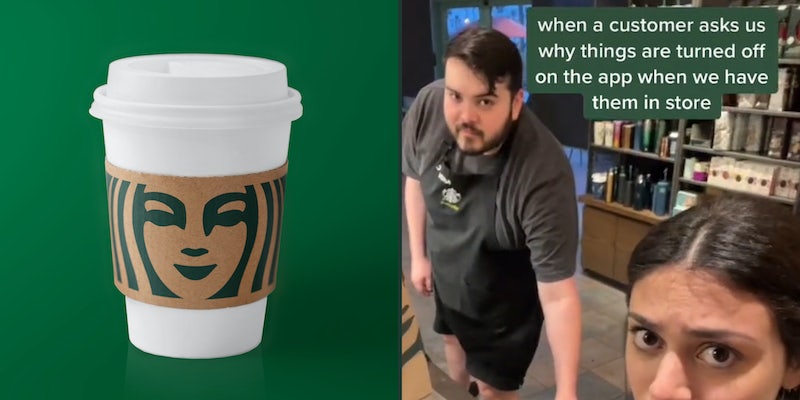 ‘When a customer asks us why things are turned off on the app’: Starbucks workers joke about making items ‘sold out’ on app

'We do it to keep up w inventory.'

A TikToker who works at Starbucks joked about customers’ reactions to items being unavailable on the app but available in-store.

In the video, TikToker @lanakassihhh records themself with a co-worker as the text overlay says, “When a customer asks us why things are turned off on the app when we have them in-store.”

“Like [I don’t know] ask the openers…” the caption adds.

When an item is unavailable on the app, it is marked as “sold out at this store.”

The video was viewed over 100,000 times in the five days it’s been up on the platform.

While the worker’s video left many confused, fellow apparent Starbucks baristas resonated with the TikTok and expressed appreciation for the joke.

“This was really funny,” one commented.

Another user asked for more clarification. “Wait, but why is this?” they questioned.

An apparent barista broke it down for the user.

“Sometimes we mark them unavailable when they’re low [because] mobiles can go over what we have in inventory,” one said, to which @lanakassihhh responded, “Exactly.”

“We do it to keep up w inventory bc we manually do it, example someone orders three lemon loaf and we only have one left, it’s the same w milk,” another aimed to explain.

This seems to be a common practice in busy chain coffee shops, as a Dunkin’ worker recently went viral for admitting to shutting off her location’s mobile order machine in a TikTok.

The Daily Dot reached out to @lanakassihhh via TikTok comment.