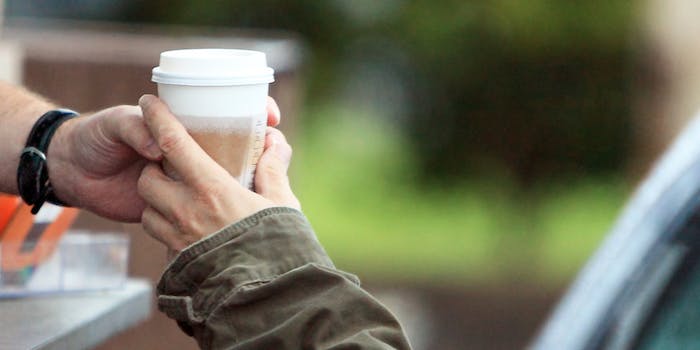 How customers are getting burned by the Starbucks hot coffee lawsuit

In this case, justice was not served.

North Carolina police officer Matthew Kohr probably knew what he was getting into when he decided to press charges against Starbucks.

In January 2012, Kohr took a routine trip to the coffee chain and picked up a venti—a large, 20-oz. coffee for the layman. Kohn claims the lid popped off and the cup “folded in on itself,” spilling scalding hot coffee in his lap, burning his inner thigh and the tip of his penis. The spill caused third-degree burns and triggered his preexisting Crohn’s disease, resulting in intestinal surgery. Kohr, along with his wife, Melonie, sued Starbucks for $750,000 in medical bills and damages, claiming they’d lost intimacy as a result of the injuries.

A 10-2 majority ruled in favor of Starbucks, and Lt. Kohr walked away with court fees. Starbucks lawyers noted that Kohrs waited over two hours before going to the emergency room, instead opting to get his truck and take photos of the injury rather than seeking out care.

In the court of public opinion (i.e., social media), Kohr was biting the hand that fed him since, after all, Starbucks gives police in uniform free coffee.

This man accepts a free cup of coffee—then sues Starbucks when he allegedly gets burned, saying his love life is ruined! #HotCoffeeLawsuit

Kohr’s case inevitably drew comparisons to the landmark ruling of the Liebeck v. McDonald’s case from 1994, when the court ruled in favor of a 79-year-old woman who received third-degree burns after the fast food chain’s coffee spilled in her lap. She was awarded $2.7 million in damages, although that figure was reduced to $640,000.

The “hot coffee case,” as it’s known, is commonly cited as opening the floodgates of the U.S. civil justice system and used as an example of the frivolity of Americans looking to earn their retirement through the broken justice system. Or at least that’s the common argument.

Regardless of the fact that copycat cases sprung up after Liebeck v. McDonald’s, public opinion is often in favor of the corporation in these coffee cases and so is legislation, creating an atmosphere that absolves corporate entities from liability while deteriorating consumer protection faster than coffee burns skin.

Sure, coffee-related lawsuits give civil cases a bad rap, but “lawsuit abuse” rose to prominence in the 1990s and was used in the 2000 election as one of George W. Bush’s major platforms. Mother Jones reported:

The term “lawsuit abuse” was coined in the early 1990s by Jan van Lohuizan, a Washington pollster who later helped plan Bush’s 2000 presidential campaign. More than 100 corporate-funded groups have been working to convince the public that the legal system is out of control; organizations such as the American Tort Reform Association and Citizens Against Lawsuit Abuse, using expensive PR firms and funds from companies like Philip Morris, have spent years testing sound bites and spreading stories of a court system out of control.

Bush’s second candidacy hit against frivolous lawsuits much harder, targeting the former Senator John Edwards of North Carolina (also a Democratic candidate for president in 2008), who was a career trial attorney before entering politics.

Invoking ideas of “personal responsibility,” political rhetoric against lawsuits time and time again blames the victim. “They should have known the coffee was hot.” “It’s common knowledge there are tornadoes in Texas, they shouldn’t have bought a home there.” “Any surgery is high-risk, the fact that the patient died is on them.”

In fact, lawmakers persistently push legislation that protects the rights of behemoths like insurance companies. Just last month, senators in Texas passed a bill, SB 1628, that would make filing “frivolous” lawsuits against insurance companies much tougher on residents in the Rio Grande Valley.

After an epic hailstorm damaged the property of many McAllen residents, nearly one in three weather claims became a lawsuit, Valley Central reports. According to the report, homeowners filed insurance claims that were estimated to be around $250 million in damage, magnified to $600 million after factoring in the lawsuits.

McAllen attorney Michael Moore, who is in no way related to the famous documentarian, expressed concern over this passage:

While SB 1628 still has to move through the Texas House of Representatives before it gets to the governor’s desk, it certainly shows where the politicians’ interests lie (hint: not with the voting public).

Before Texas’s SB 1628, the federal government also tried to create more hurdles to prevent lawsuits that had some serious implications for the American people. The Lawsuit Abuse Reduction Act of 2013, which passed the House but didn’t make it through the Senate, would have required courts to automatically fine plaintiffs for bringing frivolous lawsuits. Courts can already decide to fine plaintiffs if they decide a case is time-wasting, but often doesn’t utilize that option, according to a report by the Hill.

Democrats largely opposed the 2013 bill, asserting that it could have disastrous effects on civil rights lawsuits which “often deal with novel legal issues, [making] them more susceptible to rules that require lawyers to verify that they are filing proper cases.” The Obama Administration agreed with this position.

However, not every lawsuit is spilled coffee, just as every plaintiff isn’t looking to make a quick buck. The civil justice system is ostensibly in place to protect Americans from insurance companies, racist employers, abusive cops, and, yes, sometimes scalding hot coffee. Whether or not these powerful entities are held accountable isn’t the case, but the mere fact that they could have to own up to negligence or abuse is a reason good enough to destigmatize lawsuits.

In fact, these civil suits aren’t just a crucial component of the justice system. They often serve to make up for its failures. Over the past year, the NYPD has paid out $212 million dollars in abuse claims against the city, many of which were leveled by residents of the South Bronx and central Brooklyn, areas with a tortured history with police brutality. After Eric Garner‘s family failed to find justice for his death at the hands of Officer Daniel Pantaleo, they filed a $75 million suit against the city.

In the case of Lt. Kohr, justice may not have been served with an extra shot of sugar-free vanilla; however, Starbucks, at least for a second, sweating over the hot coffee. But with the courts ruling against Kohr, he’s not the only customer getting burned.