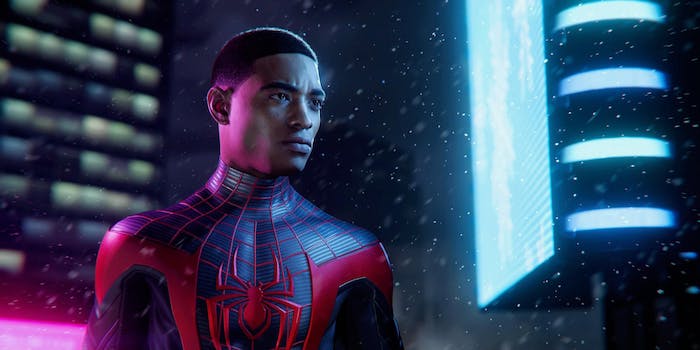 Spider-Man: Miles Morales apparently isn’t a sequel or expansion. Then what is it?

It'll be part of the remastered 'Spider-Man' game from 2018.

When Sony unveiled its initial lineup to accompany the launch of the PlayStation 5, the title that received the most excitement from fans was easily Spider-Man: Miles Morales. But hours after fervor about a sequel to 2018’s Spider-Man spread online, Sony is now walking back the assertion that Miles Morales is a sequel.

Spider-Man: Miles Morales was described as “a new adventure from Insomniac Games” when it was announced during a reveal event for Sony’s PlayStation 5, and based on what was shown in the announcement trailer, it was easy to presume or infer that Miles Morales was a sequel. And it’s not a far leap to figure that a Spider-Man video game sequel would star Miles: In a post-credits scene for Spider-Man, we see Miles—who is already a playable character in the 2018 game—reveal his newfound powers to Peter, who then returns the favor.

But according to Sony’s VP head of European Business Simon Rutter, Miles Morales isn’t a sequel. Instead, it’s more of an extensive expansion that will be attached to a remastered version of the PlayStation 4’s Spider-Man, which was released in 2018.

“I guess you could call it an expansion and an enhancement to the previous game,” Rutter told the Telegraph. “There’s a substantial Miles Morales component—which is the expansion element—but also within the game as well there’s been major enhancements to the game and the game engine, obviously deploying some of the major PlayStation 5 technology and features.”

But in a tweet, Insomniac Games called Miles Morales a “standalone game.”

Many fans would’ve likely been excited about the prospect of playing Miles Morales as Spider-Man no matter what form he took; Miles is an extremely popular comic book character and Spider-Man: Into the Spider-Verse, which stars Miles Morales, debuted to near-universal acclaim in December 2018.

Spider-Man: Miles Morales will arrive on the PlayStation 5 sometime this holiday season.