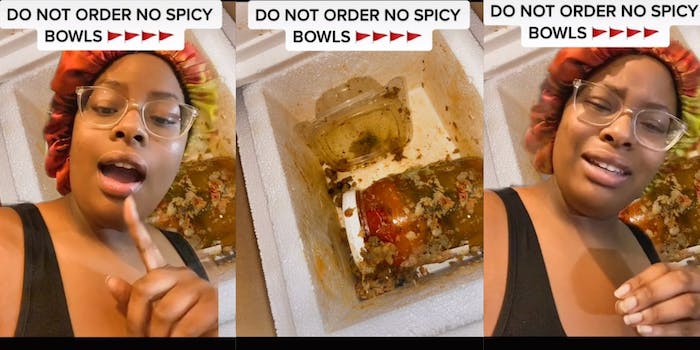 What is going on with spicy bowl TikTok?

As Pink Sauce made headlines, another TikTok food trend got caught up in it.

As criticisms of Pink Sauce circulated on TikTok last week, and its creator pushed back on claims that it made people sick, another TikTok food trend got caught up with it: spicy bowls.

It’s a regional dish that’s been circulating on TikTok for a little over a year. Jamaica, who posts as TheeBakerGirl and is based in Pensacola, has “spicy bowl trend creator” in her bio but doesn’t take credit for inventing them.

Spicy bowls have been around Florida “for a while,” she tells the Daily Dot, and Orlando is a popular spot to get them. In June 2021, she posted her first spicy bowl TikTok and a week later she was taking and shipping online orders.

In the last year, plenty of others have attempted to market their own spicy bowls; the hashtag #spicybowlflorida has more than 16 million views, and #spicybowl has more than 76 million. Most of Jamaica’s customer base is in Florida or Texas, but there are spicy bowl variations from Louisiana, where creator Rolling with Melia calls hers the “original New Orleans snack box” and includes crawfish, as well as Mississippi and Tennessee.

To wit, Jamaica says last week she spoke with Chef Pii, the Florida-based creator of Pink Sauce, when she was having some PR issues. Jamaica reached out to her about an order (“I ordered it before all this foolishness was going on,” she says) but ended up chatting with her on the phone and offering some advice about the product and her website.

“I really do think she could be successful in this,” she says. “There‘s just a few mistakes that have been made, and with correcting them I really think she will have a successful business.”

Because all the ingredients in her spicy bowls are pre-packaged and store-bought, Jamaica says making them at home and doing one or two-day shipping isn’t an issue, and she does allow locals to see where she makes them, so people feel comfortable. “We are big on sanitation and cleanliness.”

With the rise in DIY spicy bowl content comes quality control issues, of course. A June TikTok about ordering a spicy bowl that allegedly contained spoiled crawfish and did not come packed with ice went viral last week after being posted to Twitter, and it was held up as a warning about spicy bowls. On Twitter, there were quite a few people referring to the “Pink Sauce lady” and the “spicy bowl lady.”

“On social media, when they see one thing wrong, and there’s a bunch of people who make the same thing, they group us as a whole,” Jamaica says.

Deva, the Florida creator who posted about the crawfish incident, tells the Daily Dot her negative experience was with Rolling with Melia, the New Orleans creator.

“It was just something I wanted to try,” Deva says. She received a refund for that order, and she posted a more recent review of TheeBakerGirl’s spicy bowl, which she says “turned my negative experience into a positive one.”