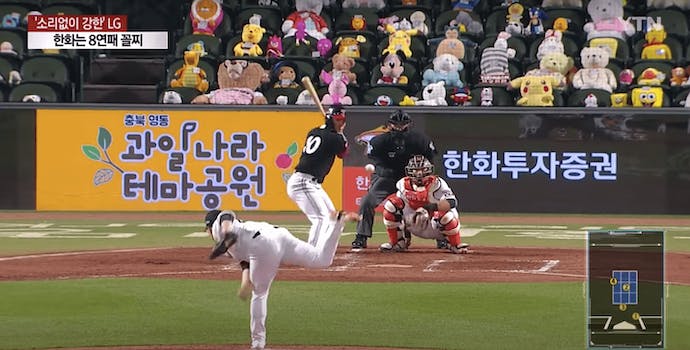 Coronavirus headlines may have taken a backseat to stories of police brutality and protests over the past two weeks, but the global pandemic continues to ravage parts of the world.

In an attempt to return to some semblance of normalcy, some sports leagues have resumed their seasons without live audiences. Among them is the KBO League, South Korea’s professional baseball organization, which is hosting games that are closed to the public—but open to Pokémon and SpongeBob plush dolls.

Footage from Daejeon Hanbat Baseball Stadium, home of the Hanwha Eagles, shows them playing to an audience of assorted life-size plush toys. Pikachu, Dragonite, and Snorlax are all present, as are SpongeBob and Sonic the Hedgehog. Mickey Mouse even joined the party!

The plush dolls don’t seem to be practicing social distancing, as they have no empty seats between them. But this photo from the Qoo indicates that they do rotate seats, so hopefully, everybody gets a chance to sit behind home plate.

The KBO League’s incorporation of plush dolls is a wholesome alternative to South Korean football team FC Seoul’s placement of sex dolls in the stadium during its playoffs against Gwangju FC. The sex dolls caused a minor scandal, with fans and general social media users lambasting the decision. (They also looked creepy as hell.)

So far, the Hanwha Eagles’ special audience members have received a far warmer reception on Twitter, with some recommending the KBO League make a permanent switch.