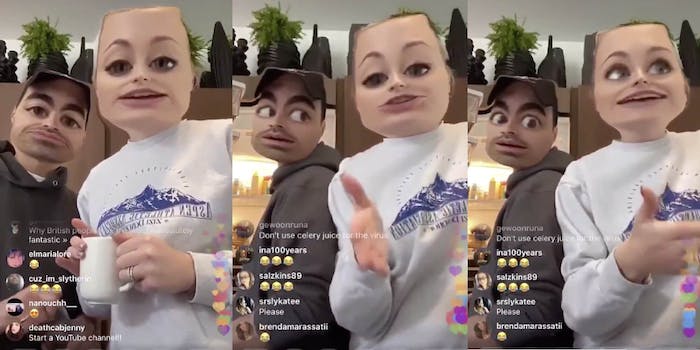 Sophie Turner has a message for those who are not willing to self-quarantine, and it comes days after Vanessa Hudgens and Evangeline Lilly dismissed responses to the coronavirus (COVID-19) pandemic as overdramatic.

Lilly said she didn’t want to self-quarantine because she values her “freedom” over her life, while Hudgens posted a video saying she felt responses to the pandemic were a bit over the top and that the deaths were inevitable.

Turner had a message for them, and all those who feel the same way. In an Instagram Live video, the actress said that those who do not self-quarantine or take the coronavirus pandemic measures seriously “could be infecting other vulnerable people.”

“Stay inside. Don’t be fucking stupid. Even if you count your freedom over … your health. I don’t give a fffff about your freedom,” Turner says as a doe-eyed, shook Joe Jonas looks on. “It’s not cool. And it’s not big. And it’s not clever. And that’s the tea.”

Turner and Jonas used the big head filter, making their heads and eyes appear much larger than their actual sizes and bringing us some much needed comedic relief.

“I’m living for sophie turner dragging evangeline lilly and vanessa hudgens after they said the coronavirus quarantine is overdramatic and they value their freedoms over their health. sophie did not come to play,” Twitter user @dicksgraysn wrote, along with the viral video.

People overwhelming agreed with what Turner had to say, though there were a few who opted to defend Hudgens.

“Vanessa stayed inside the whole time, she’s allowed to vent about it, we all have, but she never broke quarantine,” user @alexaplaysayok said.

However, it was her husband who stole the show.

Fans could not get enough of his facial expressions in the video and subsequently tried to meme his reactions.

Turner is not the first celebrity to post videos encouraging their fans to stay inside. Kylie Jenner posted a video after the surgeon general asked her to talk to her young fans about the seriousness of this virus.

She then went on Twitter to say, “I hope everyone is feeling well! it’s so important right now to self-quarantine to ensure we aren’t endangering ourselves or anyone who can’t handle this virus.”