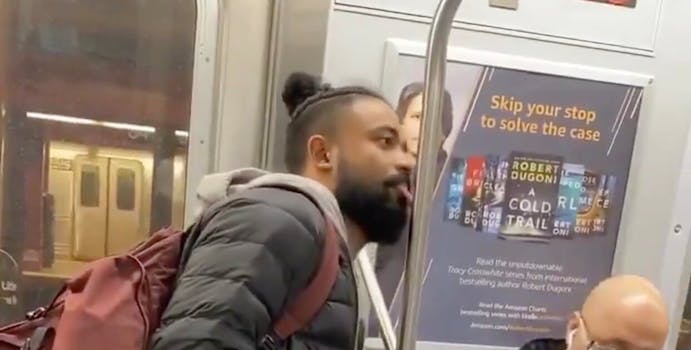 Why did this YouTuber lick a subway pole during a pandemic?

'People do anything for clout.'

A video of YouTuber Princezee licking a subway pole went viral on Twitter on Wednesday. Commenters blasted Princezee, whose real name is Zeeshan Ali, for committing such an unsanitary act amid the coronavirus pandemic.

In the 8-second video, Ali repeatedly runs his tongue over a subway pole while a passenger wearing a face mask scoots away in their seat. The video, which was posted to the WorldStarHipHop Twitter account has accumulated over 300,000 views and over 570 retweets.

Ali is also a content creator on TikTok and has over 2 million followers on the app. His videos often involve public pranks, and a recent clip shows him being dragged to the street by people wearing hazmat suits. Another shows him wearing a bubble sumo suit and bumping into people at a subway station.

But commenters were particularly alarmed about Princezee’s pole licking.

“Even in times when there isn’t a deadly virus going around this is nasty!” one user wrote.

Ali’s management team told the Daily Dot that Ali was inspired by an iFunny video of a child licking a guardrail. The team also said in response to the video, Ali received “countless” death threats.