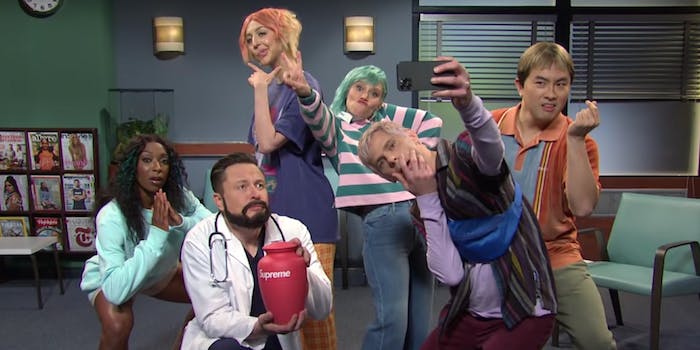 ‘Erasure in realtime’: ‘SNL’ called out for appropriating, miscrediting AAVE

'Even if the intent was satire, poorly done satire is still harmful.'

Last night’s episode of SNL is being criticized on Twitter—and it’s not just because of Elon Musk’s hosting chops.

A skit from the episode, titled “Gen Z Hospital,” is creating controversy online. It revolves around a group of friends waiting to hear updates about their seriously injured “bestie.” The sketch is written near-exclusively in “Gen Z internet slang,” which has much of its roots in African American Vernacular English (AAVE). Slang used in the sketch like “bruh,” “pressed” “catch hands,” “cuh,” and “tea” are all considered AAVE terms. It features Musk and cast members Kate McKinnon, Mikey Day, Heidi Gardner, Ego Nwodim, and Bowen Yang.

Many online called out SNL for blatantly mocking AAVE and incorrectly attributing the language to Gen Z teens. One of the main criticisms of the sketch was the willful disregard of AAVE grammar rules.

“the appropriation of AAVE by white people is gross, the mislabeling of AAVE as a ‘Gen Z phenomenon’ is also gross,” engineer Aditya Mukerjee said on Twitter. “but on top of that, the SNL skit reads like they just pulled a list of terms from UrbanDictionary and sprinkled them in, not caring that AAVE has a defined grammar!”

Others called it cultural erasure and pointed to the sketch as a reason to gatekeep AAVE.

“love the relabelling of AAVE and a few assorted BLACK LGBTQ+ phrases as ‘Gen z’ speak,” one Twitter user wrote. “love to see the erasure in real time.”

Some people felt the skit was highlighting how young people appropriate Black culture, saying the cringey script replicated what it sounds like when non-Black people misuse AAVE.

“Gen Z Hospital was making fun of the young social media crowd that appropriates & misuses AAVE on TikTok & Twitter all day,” writer Umohowet Taushi Yelayu wrote, adding in a thread, “To actually be targeting AAVE, they would have to properly replicate it. The stuff we saw on that screen wasn’t AAVE. It was Gen Z/Tik Tok’s poor appropriation of it. The people on the screen were young non-Black people.”

Others, however, felt that the joke was harmful, whether or not it was making fun of the way non-Black youth incorrectly use AAVE.

“even if the intent was satire, poorly done satire is still harmful,” one Twitter user responded.

The co-opting of AAVE by non-Black people on the internet has long been contested. As activist and writer Wagatwe Wanjuki pointed out in a tweet, white millennials have also adopted AAVE. And in 2020, Insider’s Bria Overs wrote an analysis of Gen Z and the internet’s use of AAVE, highlighting AAVE’s roots in slavery and how its appropriation often reinforces racial power dynamics by leaving its originators out of potential compensation.