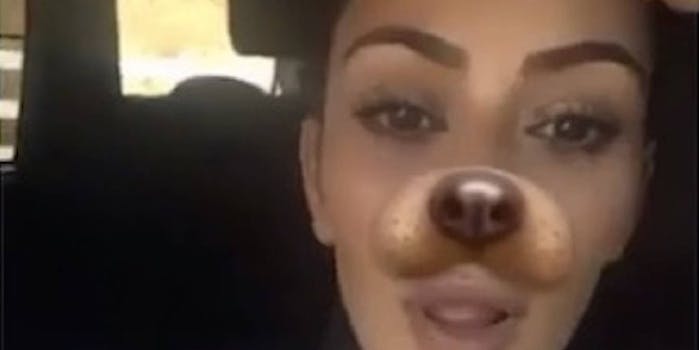 How did the dog face become Snapchat’s ‘hoe filter’?

Women use the Snapchat dog filter—and men shame them for it.

When it comes to Snapchat filters, some are better than others. The rainbow puke is iconic. The Bob Marley was misguided. But Snapchat‘s biggest contribution to the range of our internet self-expression may well be the dog face filter, which has emerged as an unlikely shorthand for flirty-sexy vibes.

Some of the first to call attention to women’s usage of the dog face were men who sought to shame them for it, branding the dog face “the hoe filter.” The nickname stuck, the misogyny was normalized, and a meme was born.

Here is one hypothesis about the person who first decided to link a dynamic image overlay of a cute dog with its tongue sticking out to promiscuity and “sluttiness”:

Who decided having the dog snapchat filter made you a hoe? Lol a lil boy probably

That is an extremely good guess, Marisa! As soon as the dog filter came out, fellows on the Internet started acting sanctimonious about it.

TO ALL GIRLS THAT USE THE DOG FILTER ON SNAPCHAT :https://t.co/gpy5FEeirw

Kim Kardashian reinforced the “hoe filter” label last week when she used it on her own Snapchat dog video, although she may have been employing it sarcastically to preempt the inevitable comments from her detractors.

All of this whining, mostly from men, has only made women who use the dog filter funnier and more defiant. There are dozens of women (and some guys) firing back on Twitter with dog selfies, refusing to be Snapchat-policed.

my expression when someone says the dog snapchat filter makes you a hoe pic.twitter.com/hTscGGQLju

Some fans have even written articles in defense of the maligned filter. Its appeal—the reason it’s become so strongly associated with women in the first place—is multifaceted. Yes, it’s very cute, but it also applies an airbrush-style effect to the non-dog portion of your face.

There’s a pretty blatant double standard for women on Snapchat: Your looks are constantly scrutinized, but if you use a filter that enhances them, you’re a “hoe” or “thot.”

And even though women are working to reclaim the dog face, Snapchat slut-shaming is a moving target. Do you like the flower crown filter? Too bad, because that apparently makes you a “hoe” too.

If she Uses the The Flower Crown Filter on Snapchat…… She A HOE!!….. Idc idc Not up for debate

It’s not as if sexism is a new problem, or one that’s specific to Snapchat, but it’s fascinating and horrifying to watch the predictable way it seeps into every new online space.