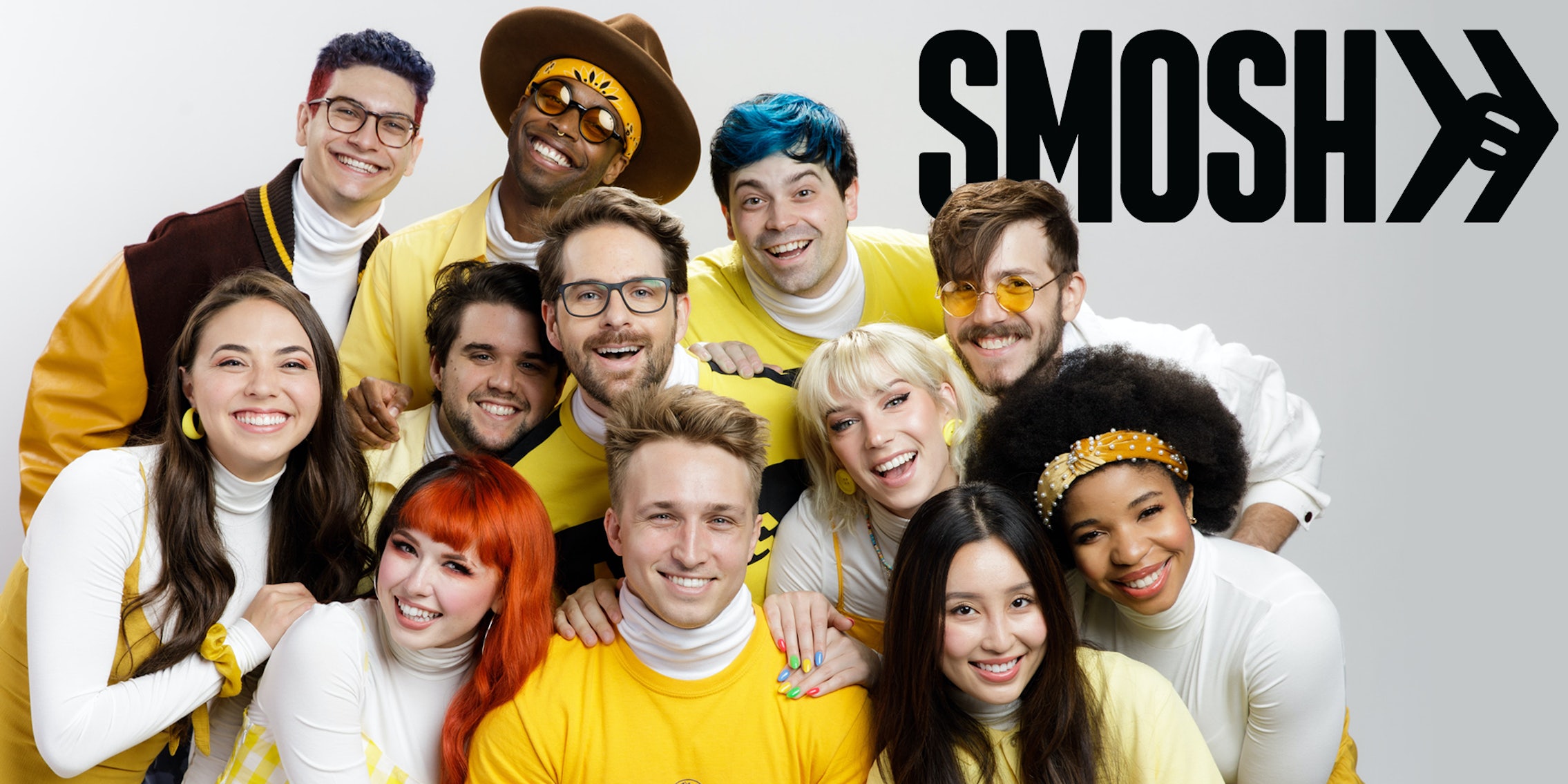 From Myspace to Mythical, Smosh co-founder Ian Hecox and CEO Daniel Tibbets share how the brand has grown over 16 years

‘What they delivered from the comic perspective is extremely impactful on an entire generation.’

Smosh, the iconic YouTube comedy channel founded by Ian Hecox and Anthony Padilla, was a staple in many 2000s kids’ lives. The project has grown with social media itself, with the duo initially posting funny videos on their own website (smosh.com), transitioning to Myspace, and finally making their way to the then-new video sharing platform, YouTube.

“Back then there was no such thing as a career in digital media. For us, it was really just boredom,” co-founder Hecox told Passionfruit in an interview. “The only way to go ‘viral’ was to get on the front page on YouTube, that was really the only way to get noticed. There wasn’t any algorithm.”

Monetization tools didn’t really exist in the early YouTube days, but Hecox and Padilla were also ahead of the trend when it came to crowdsourcing. Since they were filming all their content on a webcam, they decided to ask their fans for donations to buy a higher quality camera. From there, they decided to sell merchandise like T-shirts. Eventually, in 2007, YouTube’s first partnership program rolled around, giving a select group of creators a cut of the advertising revenue made from their videos.

“That was the first sort of real guarantee that we could make this into a career,” Hecox described.

While the channel was well-known in its infancy 16 years ago, Smosh has since grown to a titanic size, boasting over 76 million subscribers and followers across its various social media accounts. It now has multiple channels—including Spanish channel El Smosh, gaming channel Smosh Games, and non-scripted channel Smosh Pit—and it has even expanded into more traditional media, producing albums, television, and films.

“Our goal for probably the first eight years was to get more and more sort of filmic. Hire a crew, hire camera people, sound people, lighting, a producer, an editor, get it more and more like a higher quality product.”

However, Hecox said a few years ago the Smosh team decided its content was becoming “too polished” and almost like TV. Today, he says Smosh’s focus is standing out from other channels using the strength of its ensemble.

“I think one of my goals with Smosh was to expand it and bring in talent that isn’t just myself and bring in other points of view,” Hecox described.

“I think the beauty of being on an ensemble cast is that each person’s unique sense of humor is embraced and celebrated in a way. Every day at work feels like a bunch of friends just having fun on the internet—incorporating the new memes, tweets, or trends that we send each other into a video or series idea,” Miller described.

Miller was an avid Smosh viewer as a teenager. She said Smosh helped her learn character work, writing, directing, producing, and other skills she didn’t realize she was capable of.

“Channels like this one inspired me to make comedy sketches on a YouTube channel of my own. I always had dreams of doing sketch comedy, making music videos and many other creative types of careers that people usually give up on,” Miller said.

Topp said he joined the ensemble at a time when he was considering quitting comedy, but he was happy to find his comedic voice with Smosh.

“When I first joined Smosh, I made a conscious effort to try and match their tone, energy level, and timing, while still playing to my strengths. Over time, however, I think I’ve allowed myself to stop thinking and just do whatever I think is funniest,” Topp shared. “It absolutely changed things around for me. When I started, I had absolutely zero social media presence, and that changed very quickly. Smosh gave me such a huge platform to do my thing.”

Hecox said he wants Smosh to be an “aspirational place” for emerging comedians.

The channel’s strong team appeared to be crucial to Smosh’s survival through major business and structural changes with the brand. In 2011, Smosh was acquired by digital media company Defy Media. However, in 2017, co-founder Anthony Padilla decided to depart from Smosh to pursue a solo career. In a YouTube video titled “Why I Left Smosh,” Padilla said the decision came about due to a lack of creative freedom since Smosh became a “brand” and was brought under Defy Media’s corporate control.

Shortly thereafter, Defy Media unexpectedly shut down in 2018 when its creditor allegedly seized its assets, leaving Hecox and the rest of the remaining Smosh team to produce videos independently. As Hecox announced on Twitter at the time, the brand began looking for a “new home.”

Smosh was eventually acquired by YouTube sketch comedy duo Rhett & Link’s media company Mythical Entertainment in 2019. The two channels had essentially grown parallel to each other, with both accounts rising to popularity during YouTube’s early days and growing into their own media brands.

“Smosh always impressed us—they led the pack among breakout creators in YouTube’s early days. Ian and Anthony were true pioneers,” Rhett & Link said in a joint statement to Passionfruit. “Sometimes the press even cast us as friendly rivals, both being duos known for comedy and music, but truth is we respected one another from afar and only crossed paths for the occasional collaboration like our beloved (and recently viral on TikTok) Epic Rap Battle.”

Rhett and Link said that at the time of the acquisition, they aspired to rise to meet the demands of Smosh fans with IRL experiences, merchandise, books, and games, and new comedic voices.

“Smosh has brought a slew of incredible new creators and performers to the screen while allowing its longtime stars to flex even more of their creative talents, onscreen, behind the camera, and in our podcasting, touring, and apparel businesses,” Rhett and Link said. “We’re proud that under our watch and with our guidance, Smosh is now more than ever—and far more than while under Defy—a creator-driven studio.”

Today, Smosh is a full-fledged media company. In 2021, it brought on its first CEO: Daniel Tibbets, a storied media executive in the entertainment industry and long-time Smosh fan.

“The feeling of the importance of what Ian and Anthony built and what they delivered from the comic perspective is extremely impactful on an entire generation,” Tibbets told Passionfruit. “The beauty of this company is it’s a self-contained cycle in which people come in to create.”

Tibbets has largely focused on growth and distribution for the Smosh brand. He has ushered the brand into deals with broadcasting networks, including a recent partnership with live TV network G4. Smosh is currently looking forward to debuting “Smosh: Under the Influence Live,” their first live sketch variety show since 2016—with a drunk “twist”—on June 30th.

Tibbets said the creator economy is constantly changing, and pointed out both old and new Smosh fans have migrated to a variety of platforms and forms of entertainment.

“Even though Smosh started really with YouTube, and YouTube is an important platform for us, now we have TikTok,” Tibbets described. “The key is, how do you take the humor of Smosh and translate it to those other platforms as well.”

Rhett and Link believe it was the strength of Smosh’s comedic voice, adapting and evolving over the years, which led to its continued success.

“Sixteen years running? Nobody in digital comedy can boast that kind of longevity, and in broadcast TV, it’s really just SNL and the Simpsons. So we know Smosh has a formula that, if we all work to keep it refreshed with great creators, writers, and performers, will go another 15 years, hopefully far more,” Rhett and Link said.

For other creators who want to build a lasting career, Hecox said he thinks the best thing you can probably do is form a network with other creators to share ideas, what works, and what doesn’t.

“I think that’s what helped us in the beginning, every YouTuber knew every YouTuber back in 2008,” Hecox said. “There are so many people out there in the community that have so much knowledge. That’s my biggest advice, talk to other creators, share what you know, because it helps everyone.”

Are you a creator with a long-running channel? Reach out to [email protected] for a chance to be featured in an upcoming newsletter.