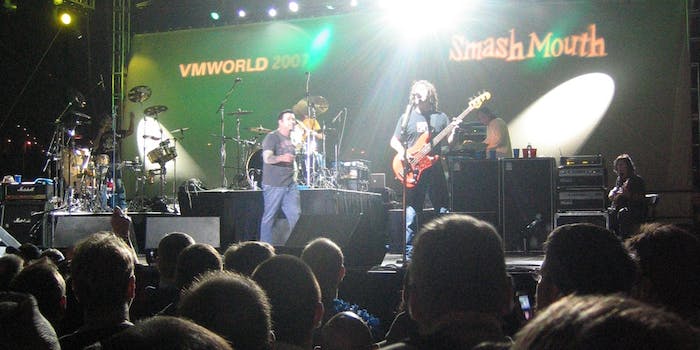 Welcome to the world of the Smashup.

Unless you’ve been walking on the sun, you know this song from its first syllable. Now it’s time to have your brain melted—or smashed?—by these remixes of Smash Mouth‘s “All-Star.”

We had only two criteria for success when we went looking through r/Smashups, the Reddit community devoted to scouring the Internet for the best “All-Star” remixes and mashups.

Rule No. 1: The perfect “All-Star” mashup or remix must be technically organic, leaving “All-Star” as close to its natural state as possible.

Undoubtedly, it will be hard to match this level of sophisticated “All-Star” power, but that’s what we’re aiming for. On the other hand, Cicierega’s mashup of “All Star” with John Lennon’s “Imagine” is, while technically perfect, also voiced by a terrifying hellbeast.

We prefer to avoid demonic entities wherever possible, and recommend leaving this particular “All-Star” mashup to trained karaoke professionals.

Rule No. 2: The perfect “All-Star” mashup must transcend the power of both songs, merging and mingling the souls of both to form a wholly new entity whose spirit-lifting qualities echo the personality of the original “All Star” while yet surprising us by reaching new and delightful musical climes.

At this point we should probably talk about the staying power of “All-Star” in the cultural ethos, and how even though Smash Mouth never again had a success as big as their “All-Star” album Astro Lounge, this 1999 anthem still seems earwormed in our psyche, equal parts ironic and iconic. We should note that though it stands as a product of the ’90s, it’s been inextricably linked with the success of the 2001 movie Shrek, which prominently featured it as a sort of character theme for the lovable green ogre inside all of us.

But we know you just want to hear the song a bunch. So without further ado, here are the 11 best “All-Star” remixes on the Internet, courtesy of the dedicated r/Smashups members who curated them first. You guys definitely aren’t L-shaped hand gestures.

It takes a Titan to battle a Titan, so obviously this Tumblr remix of “All-Star” with “All-Star” by DJ Grumbles has to reign supreme above all the other “All-Star” remixes.

This is basically cheating because these are practically the same song.

This remix is pure magic.

“Harder Better Faster” remixes are the only thing more cliché than “All-Star” remixes at this point, so naturally this one works beautifully.

An arrangement-only mashup that actually makes us look back on Linkin Park (and 2001) with fondness. Amazing.

As the remixer, Tumblr user jerryterry, notes, “Did you know that M83’s Midnight City and Smash Mouth’s All Star have a tempo difference of only 1 BPM?”

We have now inevitably entered the anime phase of the “All-Star” remix. This mashup comes courtesy of the third opening theme to the anime Nisemonogatari.

“Motteki! Sailor Fuku!” is the J-pop opening theme to an anime called Lucky Star. The animated opening featured a group of girls dancing cheerfully to its infernally catchy refrain. A few years back it was the earworm meme au jour, and spurned a million remixes, parodies, and dance-offs. Lucky for us (see what we did there), it also gave us this amazing “All-Star” mashup.

This number is surprisingly mellow, and less auto-tuned than you might expect.