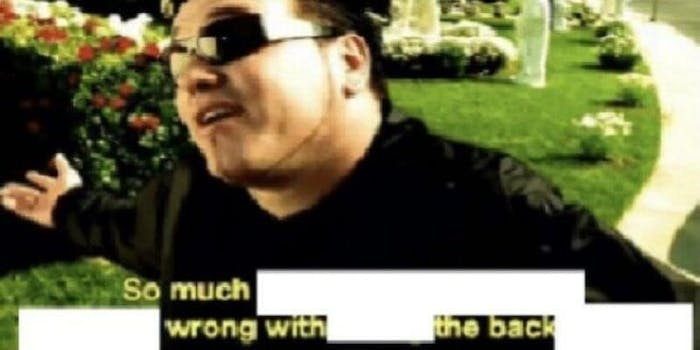 Smash Mouth and their 1999 smash hit “All Star” have long been favorite targets for mockery in the meme world. From music video parodies to weird remixes to every Shrek tie-in you can imagine (the song soundtracked the movie’s opening credits), “All Star” has been memed to death. But it’s not done yet: a subtitled screenshot from the song has gone viral this month in what some are calling the “backstreets” meme.

But really, this meme is all over the thematic map. It’s all about what you can spell with the letters in “so much to do, so much to see / so what’s wrong with taking the backstreets?”

The meme is mostly happening on Reddit at this point, but it didn’t start there: the “Fvck You Meme” Instagram account, which has a respectable 74,000 followers, was crucial in pushing both the original meme and the resulting edits. A handful of fvckyoumeme’s entries were posted on Reddit’s r/dankmemes, which helped drive the meme forward.

Without “Man of Culture,” we probably wouldn’t have “Backstreets.”

Screengrabs have always been a rich vein for meme culture to mine, but the addition (and partial deletion!) of subtitles adds new possibilities. These edits are becoming part of the natural life cycle of any meme with subtitles, even if the meme isn’t built around edits in the same way Backstreets and Man of Culture were.