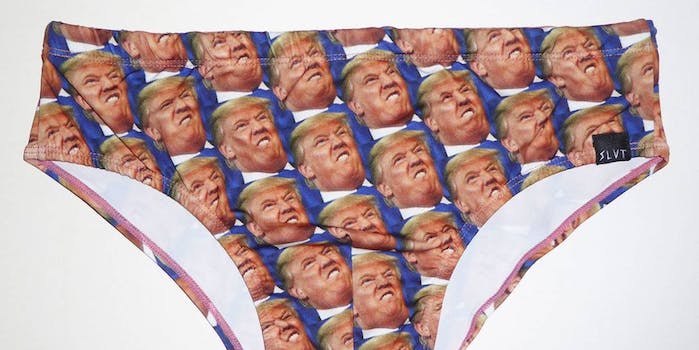 Finally, you can purchase your very own pair of Donald Trump swim trunks

On April 25, international clothing company Slut sent out a missive from its social media accounts revealing a major challenge: making the most offensive swimwear known to man. Slut struck gold rather quickly thanks to the perverse shitshow known as U.S. politics.

Behold! Donald trunks, the Donald Trump-inspired men’s swimsuit that may or may not “make your arse great again.”

After selling out in record time, "THE MOST OFFENSIVE SURFWEAR ON THE PLANET" is back in stock! There's only a limited number of these badboys though, so grab 'em while you can via the link in our bio > @slutclothing MAKE YOUR ARSE GREAT AGAIN #DONALDtrunks2016

The swimwear costs £29.99 and comes in two sizes. As of this writing, Trump has yet to comment on them, not that it matters.

Now that the Donald’s own social media presence has been commandeered by someone way more interested in complete sentences and nuance than rabid braggadocio, it’s not like anything interesting would come from that exchange to begin with. Here’s hoping Trump pulls a drunk Libertarian and waltzes onto the RNC stage sporting these bad boys in just a few weeks.