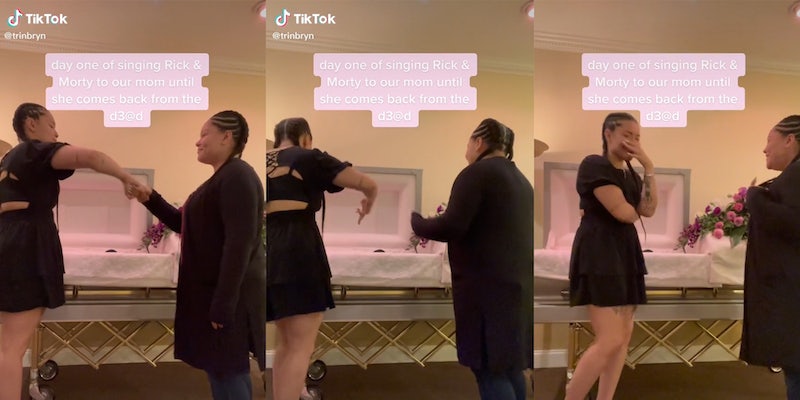 Some are wondering if a TikTok trend has gone a little too far, as two sisters went viral with a video showing them doing the “Rick & Morty” dance in front of their mother’s open casket at a funeral.

The video comes from the appropriately-named @rickandmourning account, and it’s garnered 11.7 million views in its first five days on the platform.

The video comes with the jokey tag, “We also do weddings, bar mitzvahs, baptisms, gender reveals & graduation.” In it, the sisters do the popular TikTok dance in front of a casket, with the on-screen caption reading, “Day one of singing Rick & Morty to our mom until she comes back from the [email protected]”

In a Daily Dot story published Aug. 20, Audra Schroeder noted, “Soulja Boy’s ‘Rick & Morty’ … is currently soundtracking a trend involving people rapping at graves.” The trend appears to have been kicked off by a TikToker claiming to be performing the “song of the summer” candidate at the grave of President Woodrow Wilson. (Schroeder noted this was not actually the former president’s grave.)

The original TikTok attracted comments from a number of people who thought doing the dance at their mom’s funeral crossed a line. The creators engaged some of the commenters, providing their own justification and their insights as to why this was part of their grieving process.

“This is not dark humor,” one person scolded. “This is disrespectful towards your dead and the life she lived.”

The creators responded, “My mom said, ‘You need a sense of humor.'”

Another person simply dismissed the duo as “messed up and sad.”

One commenter observed, “More so, just unprofessional and putting yourself at unnecessary risk of being fired, but go off I guess.”

That prompted one of the sisters to record a TikTok in response, talking about being in a good place at her job but “a mess” in her grieving process—and then revealed in the comments that she’s been fired after putting this video up.

That creator also noted that in the original video, asking the universe if she could “Rick & Morty her job back.”

That, however, led to one of their harshest critics weighing in with, “She was rightfully fired from this. She’s using her mom’s death for TikTok clout. She doesn’t even seem upset that she’s gone. They just giggling.”

Many more commenters came into the platform to offer support and admiration for what they did.

“I’m sorry for your loss,” one well-wisher said. “I’m sure if your mom was a very fun person and loved laughing she is laughing with you girls.”

Another noted, “Everyone grieves differently. It’s these goofy and silly things that families do to remember the good times out of losing someone they love,” before instructing everyone to “chill.”