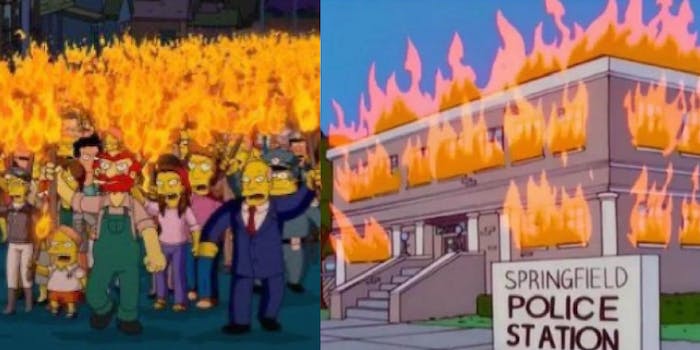 Photos from 'The Simpsons' surfaced of protests, a police station on fire, and a blacked-out White House.

Ever since a year-2000 episode of The Simpsons depicting a President Donald Trump ended up reflecting future reality, people online have kept a keen eye on the FOX sitcom in the event that any of its other episodes end up foreshadowing true events.

The show has seemingly predicted the future—specifically, the year 2020—in other cases, such as Kobe Bryant’s death, coronavirus, quarantine, and murder hornets.

But a new theory that seems to build on The Simpsons’ prediction record, which posits that the 2020 Black Lives Matter protests and even the death of President Donald Trump are predicted in the series, is false.

Twitter user @erodarcy posted four apparent stills from Simpsons that show a darkened White House, a burning police station, a mob that appears to be rioting, and Trump in a coffin. In combination, the images seem to represent a grim snapshot of America’s reality for the past few days—such as real photographs of White House with the lights off and images of burning streets. However, these stills do not come from any one Simpsons episode and certainly not one that deals with the country’s current protests.

The first still, depicting a darkened White House, is actually taken from a short satirical clip released by Simpsons about Trump’s first 100 days in office. And, rather than the White House lights being turned off, the cartoon actually shows the White House in the middle of a storm with a few lights visibly on in the bottom left corner.

The next photo posted by @erodarcy depicts an angry mob, a common trope in The Simpsons TV series and movie. The exact still in the tweet comes from The Simpsons movie, where the mob is chasing the Simpson family—not racial justice.

In the tweet’s third still, Springfield’s police station is on fire. The source of the fire in Simpsons is “police stupidity,” not protest-related. However, many other Twitter users have shared the image of Springfield PD aflame alongside a supposedly real photo of a precinct set on fire by protesters. But Snopes reports that the photo in question actually shows a burning apartment complex, not a police station.

Lastly, the photo of President Trump in a coffin was never part of a Simpsons episode. According to another Snopes article, it may have come from a 4chan forum, but the fake image’s origins are still undetermined.

Another still going around purports that Simpsons also predicted the police killing of George Floyd. In it, a police officer has his knee on a Black man’s neck, and Lisa Simpson holds a “Justice for George” sign in the background. This image was created by cartoonist Yuri Pomo after Floyd’s death, not from the show prior to it.

It may look at first glance like The Simpsons once again predicted a major political event, but a closer look at where the still images came from proves each to have no connection of any kind to the 2020 Black Lives Matter protests.