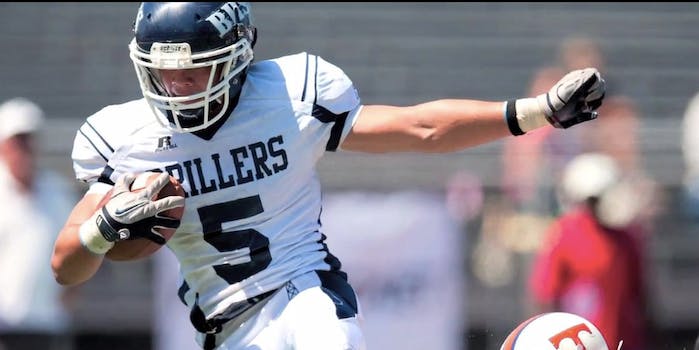 Homeless Baylor athlete just got jobbed by the NCAA

Baylor's Silas Nacita may get ruled ineligible by NCAA for being given a place to stay.

Next time you shrug your shoulders in disbelief when a college athlete goes pro after one or two seasons, consider how the NCAA generally turns its back on athletes in need.

The story of Baylor running back and special team headbanger Silas Nacita is making the rounds via all forms of social media. Nacita, a walk-on who is in college thanks to an academic scholarship, went public via Twitter to announce the NCAA had declared him ineligible to play because he allowed a friend to pay for his room and board. Nacita, whose plight as a homeless man grabbed national headlines and become a story of inspiration, told his more than 10,000 followers that he had been declared ineligible to play football by the NCAA. Showing class all the way, the student-athlete (yes, an academic-all american to boot) refused to slam the NCAA, saying instead he respected and understood its decision.

All I wanted to do was go to school and play the game I loved. pic.twitter.com/zYQ0HTaz05

But, wait—there’s more. The NCAA responded, via Twitter, that it never declared the young man ineligible, and the school has not asked for a waiver.

The NCAA did not declare Silas Nacita ineligible and Baylor has not requested a waiver for him.

To make matters more complicated, Baylor football coach Art Briles distanced himself from the matter by saying Nacita will be back if he is indeed eligible. “This is out of our control,” the coach said Wednesday. Briles, who earns an estimated $4.2 million a year as a coach, appears unwilling to bite the hand that feeds him or make waves.

"If he's eligible, he'll be back. This is out of our control, it isn't our problem with him." -Briles on Silas Nacita

With a number of high-profile ex-Baylor football players in the NFL, including Robert Griffin III, Terrance Williams, and Matt Bryant, only two ex-Bears came out in support of Nacita. Suspended Cleveland Browns receiver, Josh Gordon, and Minnesota Vikings safety, Ahmad Dixon, rushed to Nacita’s side via Twitter.

He's Trying To Better His Life And You Cut That Aid Off To a Leave Him Out On His Own All Because Of Some BS RULE. The NCAA Is Full Of BS!!!

Nacita’s story is far more than the latest he said, she said tale of the NCAA posturing to maintain an archaic rule that dates back to a time when freshmen didn’t play college sports, and TV rights were a distant consideration. Sports Illustrated has written on this topic, and reports more than 100,000 student athletes on youth, public school, and collegiate teams are homeless. Even if the NCAA is not culpable in Nacita’s case, the rules must be changed regarding underprivileged, deserving young men and women who are offered the basic necessities of life from a good samaritan.

Hollywood sort of got it close to right in the film, The Blind Side. A few discrepancies aside, the movie told the story of Michael Oher who was taken in by a wealthy family, only to wind up playing at Ole Miss and later the NFL. There are a few other similar stories (such as Saints tight end Jimmy Graham), and such feel-good aberrations give the public a sense all is well. The truth is, not all is well. By enforcing its rules on impoverished young athletes when the intention was to limit the sway of millionaire boosters and greedy agents, the NCAA only serves to make collegiate sports a short way station between high school and the pros.

While all sports fan hopes the Nacita situation reaches a favorable outcome, and the young man is allowed to rejoin the team, the rules need a major 21st century overhaul. Hopefully it’s one down, 99,999 to go.