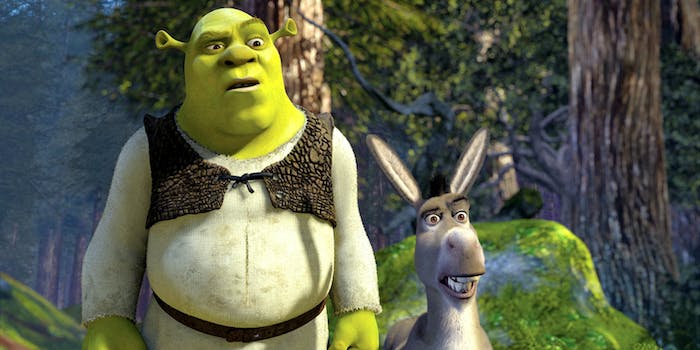 People are absolutely livid at the 'Shrek' disrespect.

Today marks the 20th anniversary of Shrek, the Dreamworks computer-animated comedy about a green ogre voiced by comedian Mike Myers, which cemented Smash Mouth’s “All Star” into mainstream ubiquity. Huge milestones of popular movies often produce flowery retrospectives, waxing nostalgic at all the contributions and influences the film has made to the medium and pop culture as a whole.

But that is not what film critic Scott Tobias penned for The Guardian, with a piece titled: “Shrek at 20: an unfunny and overrated low for blockbuster animation.”

Sugarcoating, Tobias is not. “Shrek is a terrible movie,” he deadpans. “It’s not funny. It looks awful.”

“It would influence many unfunny, awful-looking computer-animated comedies that copied its formula of glib self-reference and sickly sweet sentimentality,” Tobias continues, noting that “three of those terrible movies” were sequels, and another a spin-off with a sequel in the works.

Throughout the piece, Tobias makes his case with everything from the unfortunate casting of Mike Myers—who was hired to replace comedian Chris Farley after his untimely death in 1997, and who insisted on redoing the character in an inexplicable Scottish accent—to the crass adult humor and almost instantly outdated pop culture references.

In the kicker, he notes that Shrek was added to the Library of Congress last year by the National Film Registry, which selects 25 films each year “showcasing the range and diversity of American film heritage to increase awareness for its preservation.”

However, Tobias argues, “it’s remarkable how much of an early aughts relic it’s become, an amber-preserved monument to phenomena (Mike Myers, Smash Mouth, Michael Flatley) that hasn’t stood the test of time.”

He later jokingly tweeted that his argument was so persuasive that the National Film Registry quickly realized its error.

Here’s the thing: Tobias is not … entirely wrong? Yet, the film is still beloved by many who grew up with it, and maybe the day to come for Shrek wasn’t on its 20th anniversary. As the retrospective quickly went viral, people started getting big mad about it on Twitter.

At least a few people jumped into the fray to back Tobias up on his Shrek hate—or, at least make jokes about it.

Tobias had to have known what a troll job this piece was going to be. After all, it’s not his first day on the internet. But perhaps he could have benefited from a lesson we all learned as kids: If you don’t have anything nice to say, don’t say anything at all. Well, most of us learned as kids—but probably not from the Shrek movies.