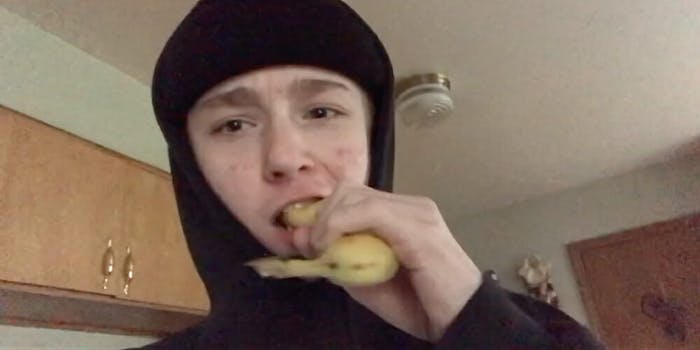 Are teens really eating foods with the ‘shells on’ for a new viral challenge?

Following reports of a new viral challenge, we set out to prove if it exists.

Multiple news outlets reported this week that teens are eating foods still in their packaging, whether it’s plastic wrapping or a fruit rind, for the emerging viral “shell on” challenge. But a handful of localized videos doesn’t constitute a full-blown viral challenge, so we set out to answer the question: Is the shell on challenge real?

The Arizona Republic first reported on Tuesday that teens were participating in the shell on challenge in Snapchat stories. The outlet compared the phenomenon to the 2018 Tide Pod challenge, which involved a few teens risking their lives by dangerously eating laundry soap for the internet’s amusement.

Like its predecessor, the shell on challenge doesn’t seem to be attracting many participating teens, but it’s still reaching folks on Twitter.

After 12 videos of high schoolers eating bananas with the peel on… I can finally say I relate to the Boomers.

I didn't realize I would lose all understanding of teenagers so quickly, but I just watched this Snapchat thing called the "Shell on Challenge" and I'd honestly just like to say what the fuck

The shell on challenge, according to the Republic, is taking place primarily on Snapchat, where a national Snapchat story showed “clips of people all over the country performing the shell on challenge.” Snapchat did not immediately respond to the Daily Dot’s request for comment.

The challenge is not just limited to produce, as teens are also taking whopping bites out of inedible objects like boxes and plastic wrappers that contain food.

The Republic reports that Liam Hamm is a high school sophomore from Arizona who went “viral” on Snapchat for biting out of a plastic carrot package as part of the challenge. Hamm told the Daily Dot that he didn’t have access to any fruit, so he improvised.

“More commonly, people do [the challenge] with things like bananas and oranges, but I didn’t have those, so I bit through the plastic to eat a carrot,” Hamm said.

A YouTube video posted on Monday shows a teen eating a banana and orange, peels and all. The teen then bites pieces of cardboard from a box containing food.

Meanwhile, a search for the #shellonchallenge on Instagram only yielded two results. In one video, a teen bites into a banana peel. In another, the participant appears to eat a stick of butter still in its wrapper.

While the challenge doesn’t yet appear to have a massive reach, the risk of it growing necessitates a warning: Eating plastic or cardboard can be dangerous, and even chomping down on a banana peel could prove to be a choking hazard.

Hamm said he’s been receiving a lot of “tasteless comments” since receiving attention online. But whether or not it proves to be a popular trend, Hamm used bonafide teen logic to find an upside to the “shell on” challenge.

“It’s getting kids to eat their fruits and vegetables,” he said.