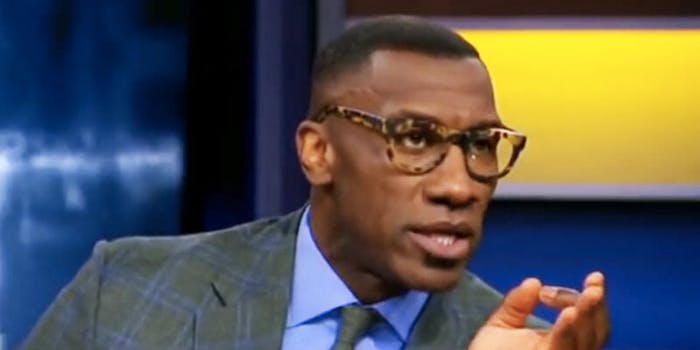 'That ain't no problem!'

By now, most people “in the know” can agree that Shannon Sharpe, co-host of the Fox Sports 1 show Skip and Shannon: Undisputed, is basically a national treasure—nay, undisputed national treasure. This is mostly due to his hilarious on-air quips like this one from just last week, when he goofed on Tom Brady over paparazzi shots of the Patriot quarterback’s so-called dad bod during a recent vacation to Costa Rica with his wife Giselle.

Naturally, Sharpe’s candor lends itself extremely well to memedom. Last year, the former Denver Bronco player went viral for popping a black and mild cigar in his mouth right in the middle of the show to celebrate his team’s win. “I be on these milds and hen dog,” he told his bemused co-hosts, referring to Hennessy cognac.

Shannon Sharpe is on live TV with a Black & Mild in his mouth. #BlackExcellence pic.twitter.com/cziNaKPO6A

Now, Sharpe has unsurprisingly found himself in the cross-hairs of the internet once again. While recently arguing about the Lakers roster on Undisputed, the host’s voice raised a few octaves as he repeated “that ain’t no problem” a few times.

Take a look below:

Twitter users were quick to appropriate the clip as a way of demonstrating how overly confident someone might be in a certain situation, or as a way of conveying “no big deal.”

*puppy starts jumping on me*

owner: im sorry. he just gets so excited to meet new people.

Popeyes: Its gonna be a 10 minute wait for spicy

And then there were the pop culture takes:

Fiona: When I was a child, a witch put a spell on me that turns me into an ogre

And if anyone was wondering how Sharpe himself feels about being turned into a meme once again, let’s just say he seems to think it “ain’t no problem.”