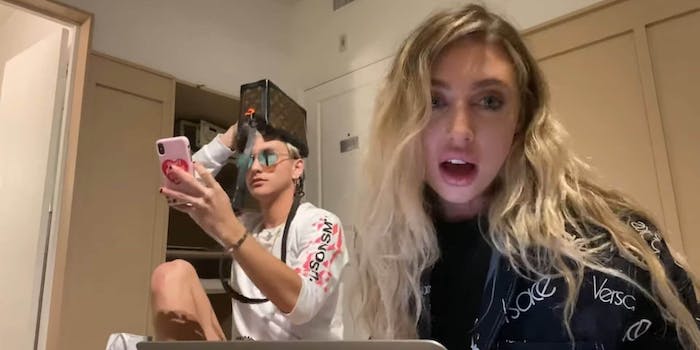 She is certainly not apologizing for anything.

The online influencer who licked a toilet for a fake coronavirus challenge that millions have watched appears to have no regrets for her stunt. And now, Ava Louise is saying coronavirus is doing its job by knocking off the boomers.

In a YouTube video published Monday, Ava Louise says she’s on spring break in Miami and that she’s decided to run for president and her motto is “Americans can suck my dick; you’re all stupid.”

Yes, she seems infuriated in the vlog, but in all likelihood, she’s hamming it up for the camera and stoking her fake outrage (and her subtle self-depreciation) for clicks.

She originally made global news last weekend when she licked an airplane toilet seat for a TikTok that was soon deleted but has since survived on Twitter.

Ava Louise has been prolific on Twitter since her TikTok dropped, bragging about how much money the video made her, talking about how sexually active she is, and ripping TV personality Meghan McCain. And no, she’s not sorry for her toilet-licking video.

“Guess what, I don’t regret it. I’m not sorry. I will never apologize for what I’ve done,” Ava Louise said. “You’re all so fucking stupid. There’s a reason coronavirus is taking out people over 50. You’re all idiots who ruined our country, our economy and raised clout-chasing idiots like me—the person you all hate so much.”

Then, she got even more personal with people who are older than 50.

“Darwinism is doing its job by knocking you out with this virus,” she said. “Not only are you ugly on the outside– seriously, get some facelifts and some [liposuction]—but you’re also ugly on the inside. You’re ignorant, personality-disordered assholes who destroyed a once proud establishment and society. You’ve ruined my generation. You’ve traumatized us.”

Ultimately, she said she blames boomers for turning her fake challenge into a global story.

“You all judge me for being hot, skinny and rich,” she said, “and try to silence me when it’s you old farts who are the fucking problem.”