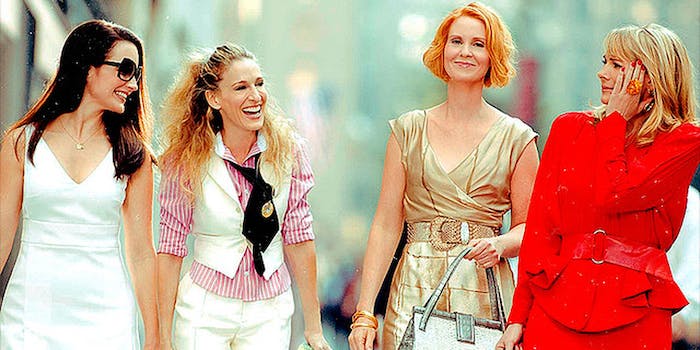 Carrie's puns get updated for 2013. It's Modern Seinfeld for SATC.

Yesterday, a Twitter account popped up for what looked like the awful sequel to the awful sequel to the awful Sex and the City movie. “It’s official! Sex in the City 3 is on!” enthused the Sex and the City 3 Twitter account. If you’re a longtime fan of the show, but felt a bit empty after paying money to see Carrie and Co. romp around Abu Dhabi, the appearance of this account likely trapped you in shoe closet full of mixed emotions.

But @SATC3quel is a parody, and a good one, updating Carrie Bradshaw’s life for modern times, and inserting references to millennial technology and pop culture trends. It’s about time SATC got its own Modern Seinfeld (or Seinfeld2000). (Side note: There’s got to be a Seinfeld in the City parody, right?)

[CARRIE V.O.]: Twitter recognized me — but to Big, I was a stranger. What does it mean when a website verifies you, but love terrifies you?

In SATC3, the ladies still have guy problems, just with more Drake references:

CHARLOTTE: It’s nuts! He was gay, and now he’s flirting with me? SAMANTHA: He started as a bottom… now his whole team’s here! ALL: [clap]

Carrie even touches on some topical issues:

[CARRIE V.O.]: I’d been named to the Sexiest Women in Tech list. In this new digital age, I was number-one — so why did I feel like a zero?

The idea came to Salon entertainment writer Daniel D’Addario in the most Sex and the City-est way possible: while watching it on his iPod at the gym.

“It seemed like a funny way to riff off of the fact that, unlike more ‘timeless’ shows, Sex and the City is so specifically rooted in not-always-funny references to the broader culture,” he said. “In one episode, Carrie threatens to vote a friend’s lover ‘off the island.’ I probably wouldn’t have started it if I hadn’t found a funny photo of Carrie typing on a modern-looking Mac for the avatar.”

[CARRIE V.O.]: Maybe a love affair is like a CitiBike. It’s easy to get on board… and easy to get hurt. [cut to Miranda falling off bike]

D’Addario adds that he’s had plenty of time to absorb the show’s nuances over the years:

I never watched the show in its initial run but, since watching the TBS reruns in college, have probably watched every episode two to five times? The early series is unpalatable, but the later, silly, decadent, goopy years are the perfect time-filler when I want the comfort of something formulaic and from a fantasy New York.

Is it wrong that this fantasy account makes us wish Sex and the City 3 really existed? If we end up getting our wish, probably.