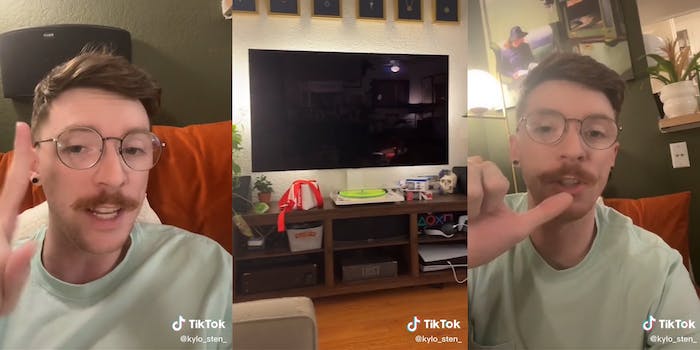 ‘Almost all of you guys are setting your TVs up wrong’: Worker reveals what people are doing wrong when setting up their TVs

This TV post-production expert has some simple but useful advice for anyone who owns a TV.

Motion smoothing has a pretty terrible reputation. Available on most modern TVs, this feature is so unpopular among experts that when you Google it, all the top results are headlines like “Motion smoothing is ruining cinema.” In a viral TikTok this week, a TV professional revealed just why this function is sabotaging your viewing experience.

The TikTok was posted in response to a prompt where people explain what makes them “cringe” thanks to things they learned in their profession. “I work in television post-production,” TikToker @kylo_sten_ replied. “And almost all of you guys are setting your TVs up wrong.”

The purpose of motion smoothing is to artificially increase the frame rate of whatever you’re watching. This means the TV essentially invents new frames to fill in the “gaps.” It’s helpful when watching fast-paced live sports, but it’s visually disastrous when watching movies. Cinephiles hate it, as proven by Tom Cruise releasing a PSA asking people to turn off motion smoothing when watching his movies and a group of A-list directors championing something called “filmmaker mode” instead.

“There is no show on television that is designed to be improved by motion smoothing,” explains @kylo_sten_, going on to reveal a second, less-discussed problem with how people are setting up their TVs: “Your TV should always be at eye level of where you’re seated.”

Apparently mounting your TV high up on the wall is a big mistake, because most TVs won’t perform well when viewed from that angle. So if you’re craning your neck to see the screen, you’re ruining your viewing experience. @kylo_sten_’s final piece of advice? Don’t use your TV’s built-in speakers.

Attracting 890,000 views in just over a week, this TikTok provoked a strong response. Some people had their eyes opened to the horrors of motion smoothing, but a lot of comments suggest that @kylo_sten_ was already preaching to the choir.

“I CANNOT STAND motion smoothing,” one commenter wrote, while others revealed their own efforts to deactivate the feature on people’s TVs. “I will stealthily change anyones TV settings when they’re not looking,” one reply reads, while another admitted, “It’s a lifelong crusade of mine to turn peoples motion smoothing off.”

The Daily Dot has reached out to @kylo_sten_ via TikTok comment.