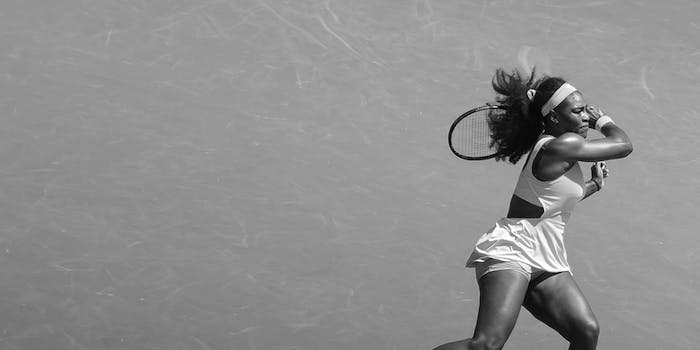 It's time she gets the respect—and compensation—that she deserves.

There’s no question that she’s one of the greatest athletes of her generation, having just won her 21st Grand Slam tennis title at Wimbledon. With just one championship away from tying Steffi Graf’s all-time record, there’s no sign of Williams slowing down anytime soon, especially after clinching four majors in a row.

But despite years of dominating women’s tennis, Williams hasn’t been given the appreciation and esteem that she’s most certainly earned. Instead, she’s subject to incessant criticism, about her body, her hair, and her appearance—critiques that often reflect deep-rooted racism and sexism. It’s not only a matter of mindless quips, as these attitudes actually affect how she’s regarded by sponsors, the sport, and the general public, especially as demonstrated via social media.

Considering all she has accomplished to date, it has become abundantly clear that Serena Williams is undervalued in every sense of the word. And, indeed, she’s the most undervalued athlete in the game today.

Serena Williams has a muscular frame. Her rivals choose not to emulate her physique https://t.co/IecMzg4AwV pic.twitter.com/gEGHd3NI3z

But, somehow, body image becomes a major point of the discussion. Even the New York Times published an article analyzing her “muscular frame” and how other women’s tennis competitors prefer to keep more “ladylike” figures—a media practice rarely seen with male athletes. The Times‘s public editor Margaret Sullivan wrote Monday that it was unfortunate the piece simply mirrored the views expressed, instead of finding a way to challenge them.

The damage was already done, however, both by the article and in social media reactions. Even more troubling was that the conversation largely lacked any awareness of how the body image standards at play in the endorsement game, and in how women athletes train, speaks to a larger bias—both in terms of sexism and racism.

Female tennis players were asked to discuss their own bodies in contrast to Williams’s, as if she were the epitome of everything they strive not to be: muscular, yes, but also black. Williams is simultaneously sexualized and caricaturized, othered, and exoticized. Her body is a representation of her athletic skill. But rather than being celebrated, it’s been scrutinized mercilessly, turned into a kind of spectacle for white amusement, with painful parallels to Saartjie ‘Sarah’ Baartman. The intersection of sexism and racism is something black women grapple with on a daily basis.

Because her body doesn’t fit a mainstream, even white ideal of what women’s bodies should look like, she’s not given a fair shake on sponsorship deals—no matter how many championships she wins.

.@diegtristan8 "she is built like a man". Yeah, my husband looks just like this in a dress. You're an idiot. pic.twitter.com/BCvT10MYkI

Undervalued by her sport

In most sports, dominant performers are welcomed with open arms, with fans and media critics alike fully embracing their superstars. But that hasn’t always been the case for Serena Williams. In fact, both Williams sisters, and especially Serena during her meteoric rise, have faced a bevy of racism and sexism during their professional careers.

As two black women breaking through a predominantly white sport, they’ve faced relentless scrutiny over the years, even dating to an early interview where a white, male journalist berated a preteen Venus about why she was so confident about her abilities. But her father, Richard, abruptly paused the interview, sternly reminding the writer that she’s just a child—a testament to how black young people are often treated and regarded as adults, well before they have an opportunity to mature.

And during the heyday of their sibling rivalry, amidst unsubstantiated claims that the sisters were altering the outcomes of their head-to-head matches, it all came to a head at the 2001 Indian Wells tournament. After Venus pulled out of a semifinal due to injury, both Richard and Serena testified to booing, racial epithets, among other insults levied in their direction, behavior rarely seen at a tennis match. It was so devastating for Serena that she boycotted the tournament for 14 years, only returning to play earlier this year.

And in October 2014, the president of the Russian Tennis Federation called Venus and Serena the “Williams brothers,” an insult that Serena found “very insensitive and extremely sexist, as well as racist at the same time.” Even during this year’s Wimbledon championships, Serena was booed for wanting the crowd to remain quiet during a point—a fairly common request for courtesy and consideration of the players.

As ESPN’s Bomani Jones tweeted, there was a noticeable difference between the standing ovation given to Serena and the runner-up Garbiñe Muguruza during the Wimbledon trophy presentation.

i generally hate making the losers come out for this ceremony, but so nice of the crowd to treat her like she won or something. confused.

yeah, this is kinda interesting to watch.

okay, it happened enough that we can comfortably say that crowd was a lot more enthusiastic about the loser. which is a bit weird.

Although Serena continues facing disparate, often unfair treatment overseas, she is not treated much better by fans and media in the United States, let alone on the Internet.

Undervalued by the public

Serena, along with sister Venus and their female contemporaries, has led the charge for American prominence in tennis during the past decade or so. Indeed, the last American man to win a Grand Slam singles title was Andy Roddick at the 2003 U.S. Open.

But after each of Serena Williams’ victories, as Jenee Desmond-Harris noted at Vox after her championship win at Roland Garros, Twitter is scattered with hate speech, along with senseless insults and skepticism about her level of play. Even David Frum, a senior editor at the Atlantic, tossed around unsubstantiated, reckless, even sexist allegations (although he claims they are not allegations) that Williams might be on steroids. 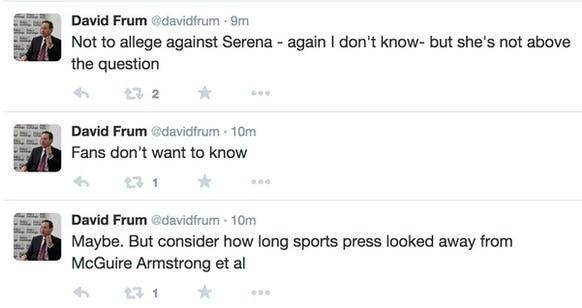 Most of Frum’s tweets have since been deleted. But these remarks remain consistent with the undercurrents of racism and sexism that continue following Serena after each of her major victories. The same can’t be said for other white women who have won several Grand Slam titles, such as Martina Navratilova, Steffi Graf, Kim Clijsters, and Justine Henin, whose careers were at their peak before the days of social media.

Because Serena’s body doesn’t fit a mainstream, white ideal of what women’s bodies should look like, it’s plausible that she’s not given a fair shake on sponsorships.

But virtually no news reports ever zeroed in on their body image, reckless allegations of steroid use, or any other slight to their achievement—nowhere near as much as Serena has endured over the years.

Regardless of the impact she has made both in tennis and in mainstream American culture, it appears that Serena will continue to be taken for granted and her record of success reduced to her body and persona, rather than her skill and talent.

Surely, when Serena retires from professional tennis, she’ll be missed. But she’s showing no signs of stopping anytime soon, with her game still in fairly pristine form and an unstoppable streak of victory in 2015. But until the time comes for her to say farewell, the least that the sponsors, the sport, and the public can do is give her the respect—and the compensation—that she deserves.

Erick Fernandez is a freelance writer focusing on the intersection of sports and culture. He has previously written for Sports Illustrated, the Guardian, Bleacher Report, and Mic.