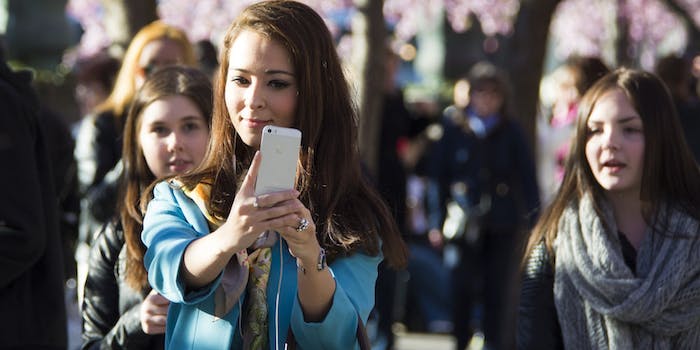 Photo via Patrik Nygren/Flickr (CC BY 2.0)

3 reasons why I hate taking selfies

We’ve been talking about selfies for a while now, I know. I thought I might one day be bowled over by movements like #365feministselfie, but my feelings have only intensified. I’m that wet blanket who only begrudgingly ever speaks the word, and I object when people call pictures with more than just themselves in them “selfies.”

I’ve tried to come up with a word I’m more comfortable with, but “us-ies” just sounds wrong, and “groupies” are already a thing, and “self-taken group picture” doesn’t exactly roll off the tongue. So, with regards to both the name we call them and the phenomenon itself, I just accept that my dissent is in the minority. Here it is anyway:

2. So many of them are altered anyway.

I’ve stood next to people far more comfortable in selfie culture than I am as they snap a pic and immediately press a bunch of buttons on their phone to alter it before posting it online.

As uncomfortable as I often am with my physical image, I hate filters more. To me, if you’re going to alter a pic, it no longer counts as an image of yourself and becomes instead an artful rendering. Nothing wrong with an artful rendering, of course. I just think it takes it out of the “Empowerment” category and more into the “Look At Me” slot.

Kim Kardashian, Selfie Queen, will soon release Selfish, a book of her selfies reportedly topping 350 pages. Yet, both she and the Queen B Beyoncé employ Photoshop artists, and sometimes that work is unfortunately evident in the posted picture. Why bother? Just post properly photoshopped pictures and call it what it is: a photo shoot with professional work done.

This is, of course, a slippery slope. In my opinion, an unaltered selfie taken under professional-quality lighting with a professional-level hair and makeup job could be described the same way. I want to get on board with the selfie-as-empowerment angle, but with so many shenanigans going on, it’s hard to tell what’s what.

Just post properly photoshopped pictures and call it what it is: a photo shoot with professional work done.

I’m a huge fan of shenanigans, by the way. I’m just upfront about it, and I tend to have an all-or-nothing mentality. I’ll post a pic and tell you how many tracks I added to my hair or mock my “casual candid” if I’m obviously in full hair and makeup. I’ve also posted completely bare-faced pictures; the whole thing is so unpleasant to me that makeup isn’t a deal-breaker.

As with anything else, I accept that my perception is skewed by my personal experience, but it feels like if you’re gonna “go there,” really go there, or don’t bother. If you’re gonna post a picture of yourself online in which you’re casually holding your phone up that’s actually been through nearly as much post-production work as a magazine cover, why bother?

These days, lots of non-celebs are joining Kim K. and Beyoncé in altering pics that are then presented as though they “woke up like this.” I don’t mind Photoshop use at all, only when it presents a detrimentally misleading image, which is, of course, subjective. I just don’t like inauthenticity presented as intimacy.

Yet again I’ll reveal myself to be a grumpy cultural dinosaur: The omnipresence of selfies has also changed what we think of as a picture. Just as language is suffering by being chopped into ever tinier bits for easy digital consumption, we’re now used to and craving those bizarre selfie angles and framing, like in Ellen DeGeneres’ famous group shot that actually did break the internet during last year’s Oscars.

I’m also honest enough with myself to say that the hideous undercurrent of my hatred of selfies is that I wish I could feel good about mine the way other people seem to. It’s hard enough for me to look at a picture that someone else took without seeing pure flaws, but to be the one taking the picture and then choosing to share that feels insurmountable at times.

As a performer, I’m used to being in character, and I’m fine with pictures in that context. I modeled for a teensy time in my youth, and though I’m not cut out for it, I could bear with it because it’s work. Snap away when I’m working, and then let me be my intimate, fully exposed self in private and in person with my loved ones.

There’s now a new, third ocean swirling between public and private life, and I have trouble navigating it. I’ve been told flat-out by industry folks that I need to post more selfies. I’m roundly mocked and shunned for not using Instagram (yet I fear I may cave soon). I’ve even repeatedly asked my editors to let me use random landscape pics or pictures of objects with my stories instead of myself.

People don’t seem to understand how uncomfortable it is for me to publicly share pictures of just me. But even my language there betrays my aggression, because the root is that I often think of myself as “just” me in a negative sense; that I am not enough. Not enough to be seen and liked just as I am.

These emotions are ugly, but they’re real and they’re mine and I have to call them out by name before I can truly change them. Setting the Kardashian-esque ones aside for a moment, I see a subset of selfie culture that is truly changing the world, and I envy what looks like freedom.

I see a subset of selfie culture that is truly changing the world, and I envy what looks like freedom.

The selfies that read as authentic to me are putting faces to the immeasurable range of human beauty beyond the tiny sliver the mainstream tells us is beautiful. When I can cut through my struggles, I actually can see, in so many selfies, the revolutionary act of self-love that’s so hard for me to fully embrace. When my years of programming cause me to respond negatively to seeing a pic with “nary a care given to grooming,” as I haughtily said above, I’m training myself to truly feel that grooming probably matters less than I was taught.

I’ve made a concerted effort to post more selfies. I swore them off for a while, on the basic premise that I’m a grown-ass woman and I don’t have to do something I don’t like. I certainly don’t need to “be like the cool kids,” and I don’t crave increased attention in that way. However, as cranky and curmudgeonly as I am about it, it’s that throbbing cavity of low self-esteem that needs to be repaired, however much the process itself hurts.

I’m excellent at grooming. It’s self-love I need to get better at. Selfie away, kids. You are beautiful. I’ll try to catch up.

Photo via Patrik Nygren/Flickr (CC BY 2.0)