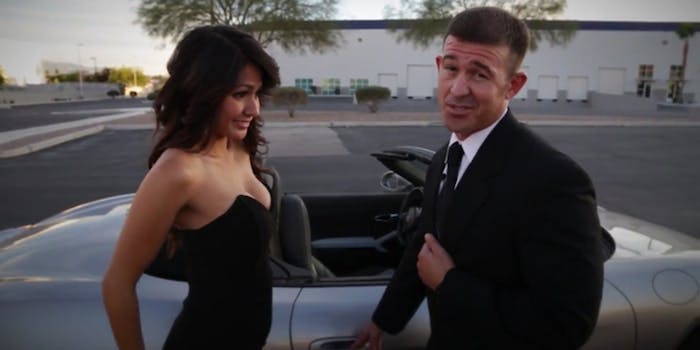 Sugar daddy dating hub Seeking Arrangement has its own version of the Affordable Care Act.

Are you anti-Obamacare, but into the idea of a sugar daddy paying your health insurance premiums? There’s a website for that.

Seeking Arrangement is a dating site that matches “sugar babies” (mostly women or gay men) with sugar daddies, therefore enabling a relationship that’s based on financial dependency and little else. And now they’ve decided to take a political stance, and are pouncing on the perceived failure of Obamacare to drum up business for the site.

Their latest video, subtly titled “Screwed by Obamacare,” assures us the group has a “solution to your Obama-drama.” And that solution is to let a wealthy benefactor pay for your insurance, “no strings attached.” The video’s creepy host enumerates all the things that aren’t covered: What if you’re an orphan? What if you fall off a ladder? He then changes into a lab coat and walks into a doctor’s office where several attractive women are filling out some forms, ostensibly for sugar daddy coverage.

“So if you’re an attractive female, or a male, if that’s what you’re into, the door’s always open for you,” the creepy host continues, right before he gets into a Porsche with a scantily clad woman, who then proceeds to give him simulated oral sex. He doesn’t mention if that’s covered under Seeking Arrangement’s health plan.

As unsettling as it is to watch an escort service attempt to pick up new clients using the GOP’s argument against the Affordable Care Act, this is part of a growing trend of anti-Obamacare “parodies.” The Republican National Committee just released its own Obamacare spoof, employing Apple’s Mac vs. PC ads of yore to make their point. Seems about right.

Seeking Arrangement doesn’t openly advertise itself as a conservative site, but it did endorse Mitt Romney in January 2012, when he gave a 55-year-old jobless volunteer every dollar he had in his wallet, at a campaign rally. Seeking Arrangement’s CEO Brandon Wade further explained the endorsement, applauding his “single act of sugar daddy-ism.”

So when do we find out Seeking Arrangement is funded by the Koch Brothers?