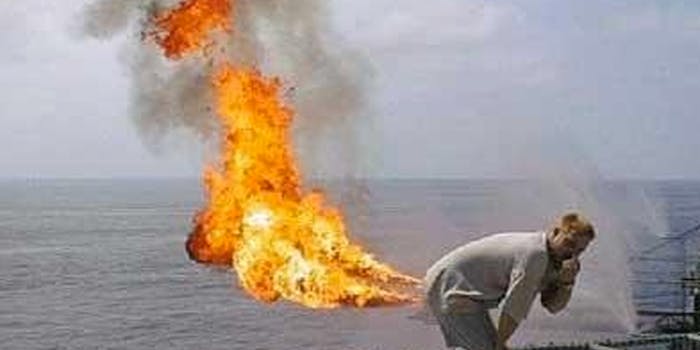 Seattle Craigslister asks woman who crapped in his car for date No. 2

Somewhere down in the depths of hell, first dates end with your date getting out of your car after she's taken a big stinky dump in your shotgun seat.

In Hollywood, a first date generally ends with a kiss. In reality, it’s usually more of an awkward hug. And somewhere down in the depths of hell, first dates end with your date getting out of your car after she’s taken a big stinky dump in your shotgun seat.

That’s at least the story being purported out of Seattle, Wash., where a Craigslister named Tad jumped online Wednesday afternoon to issue a “lo siento” “to the woman who crapped her pants in my car.”

The two had gone on a first date a few nights before—to Seattle’s Six Rivers Brewery, where they enjoyed chili beer and a basket of hot wings—and Tad reported that he’d “felt like there was a connection there.”

“I found you to be intelligent and witty and looked forward to conversation with you.”

Unfortunately, the doody went down.

“At some point in life, everyone has gambled on a fart and lost,” he writes. “It just happened to be on a first date in the passenger seat of my car. Please don’t feel bad. The package I sent you with Pepto the next day and the note that said ‘First dates are always a crap shoot. Call me’ was meant to be funny, not offensive.”

Tad, who adds that he’s “gambled on a fart and lost on multiple occasions,” considers himself the last person to judge another over the fact that they just pooped their pants, but admitted that the timing could have been a bit better—”like when you’re not sitting on a heated leather seat.”

He hopes to go out with this girl again should she be so inclined, even going so far as to offer to “take [her] someplace where we can get a meal that is high in fiber and less taxing on the digestive tract.”

Of course, this whole story is likely fake. It’s Craigslist. People love creating fake Craigslist posts in the hopes that they’ll capture the imagination of the Internet for one magical day. But it’s also funny. And on the Internet, funny wins out over truthful.

We’ve reached out to Tad and will report back should our correspondence go through. If all goes well, we’ll have a full rundown of the date’s conclusion by mid-afternoon. (UPDATE: An anonymous poop expert noticed that the text has been around since at least 2009.) 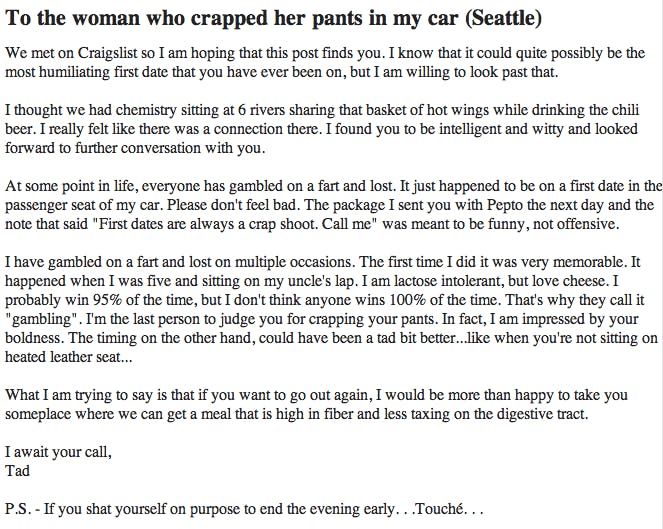