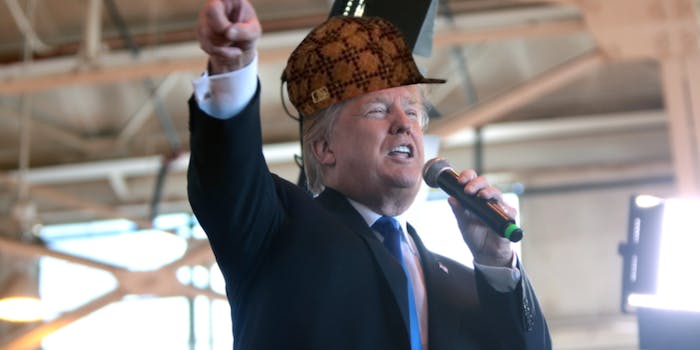 Can Trump stand up to the power of the Big Meme lobby?

Scumbag Steve is, by all accounts, not a scumbag. He’s actually a pretty chill, thoughtful dude who at one time had questionable taste in hats.

However, the OG meme star has a warning for America about the nation’s highest-profile scumbag—he really, really, really does not want you to vote for Donald Trump.

Scumbag Steve is the alter ago of Blake Boston, a resident of Marlborough, Massachusetts. Boston became an internet sensation when a high school picture of him wearing an orange-and-black flat-brimmed hat while posing in a doorway went viral as the supposedly prototypical exemplar of young-white-dude douchebaggery.

Boston has taken his viral infamy in stride and is now using that notoriety to campaign against the 2016 Republican presidential nominee.

“I’ve been around some pretty unsavory characters, and I’m telling you, Trump is as bad as they come,” Boston told the Boston Globe in an interview published on Thursday. “I’ve been so disgusted with the [Republican party] and their backing of a psychotic liar that I’ve gone HAM on Twitter when it comes to Trump. I can’t just stand by and keep my mouth shut for what I feel would be a disastrous situation for not just our country, but the world.”

Fill in till Kissinger comes thru https://t.co/378Kb7iA3f

For Hillary I'd do it with one hand tied man. Lol fuck joe https://t.co/5l33NVgAsK

Read the whole interview with the Globe here, wherein Boston goes all-in on Team Hillary, talks about growing up in a feminist household, and contemplates the limits of his meme-driven platform.