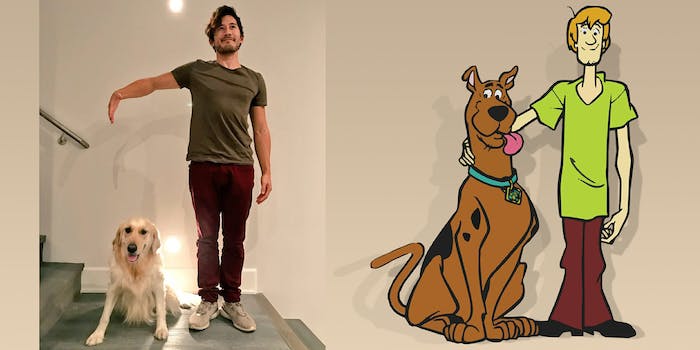 This guy wanted to look like Shaggy with Scooby-Doo but things didn't quite work out that way.

If there’s one thing we all should have learned from Missing Missy, it’s that you don’t ask people to do your photoshopping for free. It is after all, a learned skill that takes time, effort, and often large amounts of money to acquire.

And, if you think you’re going to get the results you hoped for by asking strangers on the internet, then you are truly living in a fantasy world.

Take for instance this man who thought that, out of the goodness of their hearts, people on Twitter would photoshop this picture to make it look more like Shaggy and Scooby-Doo.

Can someone photoshop Chica into my arm like this? Thanks. pic.twitter.com/cU2vGZPkA8

mark did i do it right pic.twitter.com/M3Ra3x7Smx

DID I DO IT RIGHT THIS TIME pic.twitter.com/RCeWx0zn2J

how about this mark pic.twitter.com/C2BRVJfCdP

I think this is pretty accurate! pic.twitter.com/QFPqJQ7ITH

here ya go dude, i think i did it pic.twitter.com/9dDQ0XJuIj

dont worry fam i got this pic.twitter.com/ZqcGK3iQj6

no need to thank me. pic.twitter.com/htc01VQxQZ

Well if Mark was looking for a spooky picture for his annual Halloween card he certainly has a lot of options now.

Let this be a lesson to all of you. Next time you want to ask someone to use their hard-earned artistic skills for free, think twice, and Scooby-Don’t.