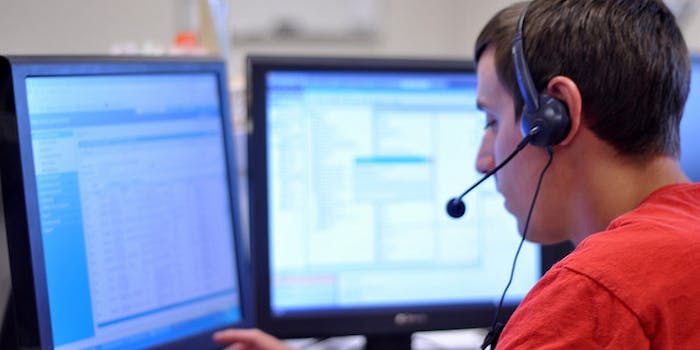 After 3 hours on hold, this customer absolutely lost it

The issue was allegedly something minor, but his temper flared and blood boiled after getting patched and rerouted multiple times.

Is this the worst, most infuriating, and scariest customer service call ever?

Yesterday, a Redditor broke a four-year silence regarding the worst customer service call at his old job. Using a throwaway account, he posted a video of the audio recording which had been passed around the unnamed “security systems” company for years – because the Redditor no longer works there.

Here it is in all its glory:

It is terrifying. The customer threatens to come into the office with a machine gun and kill everyone. Apparently, he’d been on hold for more than three hours and had been transferred around for more than a day. The audio’s uploader speculated the guy had spoken to someone who’d then gone home for the day and so the department he was calling was no longer open.

The clip sparked debate about who was right: the frustrated customer voicing anger we’ve all felt being passed around and put on hold by big companies or the representative who should not have had to face such irate verbal abuse.

Views on the crazed audio are climbing rapidly. Though the person who posted it wished to remain anonymous, despite no longer working for that particular company anymore and despite the fact that the customer service rep also no longer works for that company, it probably won’t be too long until someone figures out where the call originated.

According to the uploader, the customer was banned from ever calling again.

“Allegedly, the company took some type of legal action against the customer and now he can’t call the company anymore. The call started being circulated through my department and the company used their magic to delete it from everyone’s email, so I don’t think they’d be happy that I still have it,” the user, Lordylordylordy, wrote. To people suggesting the clip is fake, Lordylordylordy says if someone can think of a way for him to verify without getting himself or the customer service rep in trouble, he’ll do it.

He also said the man’s complaint was over “something minor” he can’t remember, “probably a piece of equipment wasn’t working.”

The old adage says the customer is always right, but in the thread, someone suggested that who you side with in this call says a lot about you as a human. Now that, we can agree, is definitely right.