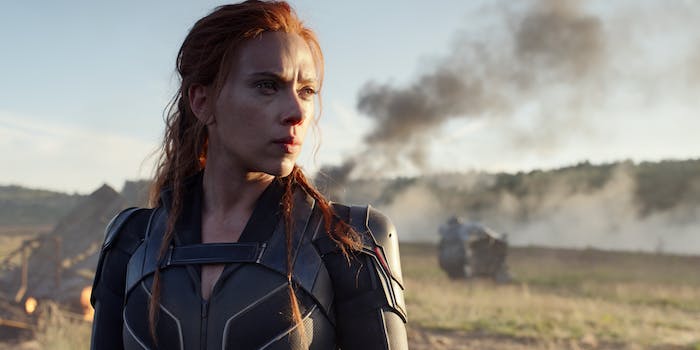 ‘This will surely not be the last case where Hollywood talent stands up to Disney’: Scarlett Johansson sues company over ‘Black Widow’

The lawsuit involves the film's release on Disney+.

Scarlett Johansson, who just capped off a decade of playing Natasha Romanoff with Marvel Studios’ Black Widow, is suing Disney for what she says is a breach of contract surrounding Black Widow’s hybrid release.

Johansson filed the lawsuit in Los Angeles on Thursday, arguing that her Marvel contract guaranteed an exclusive theatrical release of Black Widow and that Disney knowingly breached her contract by releasing it on Disney+ as well as in theaters. Johansson’s salary for starring in the film would include box office-based stipulations, and even before Black Widow was delayed due to the COVID-19 pandemic, Johansson and her representatives wanted assurance that should Black Widow’s release change because of Disney’s focus on Disney+, there would need to be further negotiations with her contract.

“We understand that should the plan change, we would need to discuss this with you and come to an understanding as the deal is based on a series of (very large) box office bonuses,” David Galluzzi, Marvel’s chief counsel, wrote, according to the lawsuit.

When the film was finally released on July 9, it would screen in theaters and be available to stream as part of Disney+ Premier Access, which allows Disney+ subscribers to rent new releases (and watch as many times as they wish) for a one-time additional fee. When Johansson’s representatives attempted to renegotiate her contract so that she would be entitled to bonuses based on Black Widow’s Disney+ earnings, but those attempts were ignored.

The lawsuit cited Disney’s press release that it earned $60 million from Disney+ Premier Access rentals during Black Widow’s opening weekend, a rare instance of a studio releasing numbers on how much a movie made from streaming revenues, to point that the move to release the film on streaming was lucrative for Disney.

According to the Wall Street Journal, which was the first to break the news of Johansson’s lawsuit, making the film available on Disney+ may ultimately cost Johansson more than $50 million.

“This will surely not be the last case where Hollywood talent stands up to Disney and makes it clear that, whatever the company may pretend, it has a legal obligation to honor its contracts,” John Berlinski, an attorney at Kasowitz Benson Torres LLP who is among the lawyers representing Johansson in her lawsuit, told the Wall Street Journal.

However, Disney, in a statement given to Variety, called the lawsuit “sad” and said that it has “no merit.”

Johansson’s lawsuit might be the highest-profile case of an actor taking action against a studio in an attempt yet. But it’s nowhere near an isolated incident as the tension between filmmakers and talent and their studios surrounding streaming-based bonuses and payouts only grows. Warner Bros. drew plenty of ire among its filmmakers last year after announcing its entire 2021 slate would be released simultaneously in theaters and HBO Max. Most of the people who had 2021 films at Warner Bros. weren’t informed beforehand, and they weren’t offered hefty payouts as compensation, as Patty Jenkins and Gal Gadot—who received $10 million apiece—were when Wonder Woman 1984 got a hybrid release. (Warner Bros. eventually negotiated payouts with those affected by the hybrid releases, which included a cut of HBO Max fees for some filmmakers.

A similar tactic occurred in early May when ViacomCBS head Bob Bakish announced that Infinite would debut on Paramount+ during an earnings call. It was a move that stunned director Antoine Fuqua and star Mark Wahlberg, and as a Hollywood Reporter article suggested, it could become the new normal during the pandemic.

The entertainment industry will surely be keeping an eye on Johansson’s lawsuit to see how it plays out given the potential implications it could have for streaming payouts, particularly in an avenue when the theatrical window is shortened and the line between theatrical and streaming blurs even further.